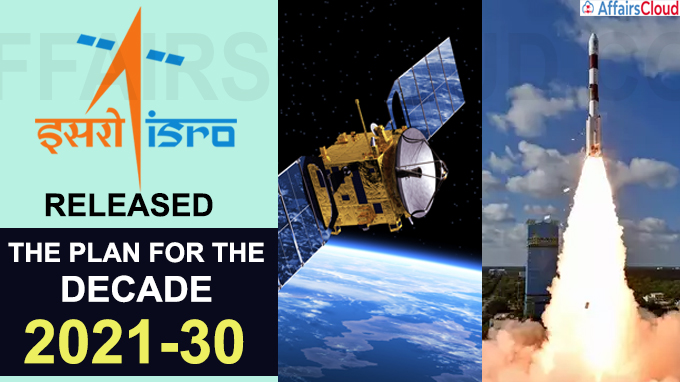 Sivan, Secretary of Department of Space (DoS) & Chairman of Indian Space Research Organisation (ISRO) has chalked out the plan for the Decade 2021-30. It has listed both Short-term vision & Long-term visions. The plan envisions the development of heavy lift rockets, reusable satellite launch vehicles & semi-cryogenic engines.

i.In the short term, ISRO has plans to execute diverse missions which are

ii.The Gaganyaan Programme India’s First unmanned flight is set to be launched in 2022.

i.The essential aspects of overall space policy required for facilitating space system development  & operation in the country are in final stages of drafting.

iii.The overall space policy will help in guiding and supporting the implementation of Space Sector reforms.

iv.The main focus will be towards self-reliance and global leadership in space systems.

i.The research and Innovation investment in India is 0.69% of Gross Domestic Product (GDP) which is low compared to 2.8% of the United States of America, 4.3% in Israel & 4.2% in South Korea.

ii.ISRO spends 22% of its budget for R&D activities.

i.The ISRO has stated that the last decade consisted of many maiden missions in almost all verticals of ISRO. Some of the are

i.ISRO has also stated that the entry of private players is disrupting the Global Space Sector.

iii.New Technologies like Artificial Intelligence & Machine Learning are being used to achieve the next generation of space systems.

iv.The satellites are also playing a major role in building the 5G ecosystem and Internet-of-Things (IoT).

Sector wise Plans for the Decade:

Every Centre of ISRO has come out with a decadal plan. Some of them are