ASEAN-India Ministerial Meeting 2019
On August 1,2019 The ASEAN(Association of Southeast Asian Nations )-India Ministerial Meeting 2019 was held in Bangkok, Thailand  co-chaired by Jai shankar and his Thai counterpart H.E. Don Pramudwinai.
i. The meet reviewed the progress in the implementation of decisions taken by the Leaders of ASEAN Member States (AMS) and India at during the 25th Anniversary ASEAN-India Commemorative Summit 2018 which was held in New Delhi on 25 January 2018
ii. They also reviewed the progress of the decisions arrived at the Informal ASEAN-India Breakfast Summit held in Singapore on November 15,2018 as also the progress in the implementation of the ASEAN-India Plan of Action (2016-2020).
EAM S Jaishankar focusses on furthering ASEAN-India strategic partnership
EAM Jaishankar highlighted methods & resources of further strengthening the ASEAN-India Strategic Partnership in the Indo-Pacific region at the ASEAN-India Ministerial Meet.
About ASEAN:
It is a regional grouping that promotes economic, political, and security cooperation among its ten members: Brunei, Cambodia, Indonesia, Laos, Malaysia, Myanmar, the Philippines, Singapore, Thailand, and Vietnam. 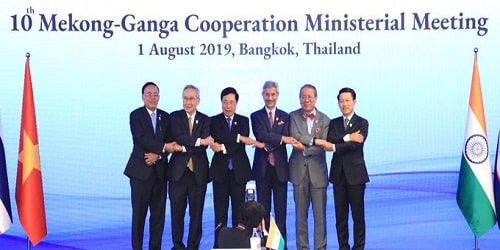 In the MCG Ministerial Meet, new MGC Plan of Action (2019-2022) was adopted that envisages project-based cooperation in the areas of MGC cooperation such as tourism and culture, education, public health and traditional medicine, agriculture and allied sectors, transport and communication, MSMEs,water resources management, science and technology, skill development and capacity building. key political, economic and security issues of the Indo-Pacific region were discussed during the meet.
The participated Ministers agreed to hold the 11th MGC Ministerial Meeting on the margins of ASEAN Foreign Ministers’ Meeting in 2020 in Viet Nam.
About MGC:
It is sub-regional cooperation organisation comprising India and five ASEAN countries, namely, Cambodia, Laos, Myanmar, Thailand and Vietnam.

26th ASEAN Regional Forum (ARF) 2019
On August 2,2019, The 26th ASEAN Regional Forum (ARF) was held in Bangkok, Thailand chaired by H.E. Mr. Don Pramudwinai, Minister of Foreign Affairs of the Kingdom of Thailand. The forum is attended by foreign ministers of ASEAN and dialogue partners, along with representatives of observer countries. External affairs minister S. Jaishankar led the India’s delegation to the event. 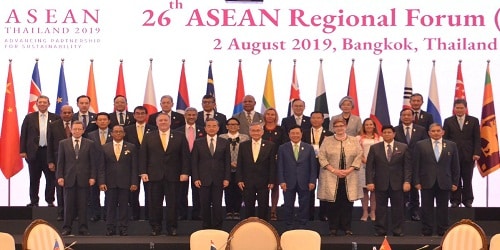 Jaishankar bats for collective action to secure Indo-Pacific at ARF
In the event, EAM enumerated India’s Indo-Pacific vision of a free, open, inclusive and rules-based Indo-Pacific, which was elaborated by Prime Minister Shri Narendra Modi in his address at the Shangri La Dialogue in Singapore in June 2018.
Bilateral Meetings:
EAM also held a number of bilateral meetings with his counterparts on the sidelines of the ASEAN-related multilateral meetings.

Talks on Kashmir to be only with Pakistan: S Jaishankar to Mike Pompeo
On August 2,2019, External affairs minister S Jaishankar responded to US President Donald Trump’s offer to mediate again on Kashmir issue by conveying to US Secretary of State Mike Pompeo in clear terms that any talks to resolve the Kashmir dispute can only be held between India and Pakistan (bilaterally)and will not invite 3rd party mediation at the meeting in Bangkok, Thailand.
Background:
i. The meeting was the second between the Jaishankar& Pompeo , while  the 1st took place in New Delhi in June,2019.
ii. Trump claimed the Prime minister Modi, during a meeting in Osaka on the sidelines of the G20 summit, had sought US mediation or arbitration in the Kashmir dispute.
About US:
♦ Capital: Washington, D.C.
♦ President: Donald Trump
About Thailand:
♦ Capital: Bangkok
♦ Currency: Thai baht
♦ Prime Minister :Prayut Chan-o-cha