President of India Shri Ram Nath Kovind visited Benin, The Gambia and Guinea from 28 July to 3 August, 2019. It was the first ever visit of the Head of State/Head of Government of India to all 3 countries. The President was accompanied by Shri Pratap Chandra Sarangi, Minister of State for Micro, Small and Medium Enterprises/ Animal Husbandry, Dairying and Fisheries and Member of Parliament Shri. Dilip Ghosh. It was the President’s fourth visit to the African Continent. The visit was undertaken to further deepen the Indian relations with the African nations.

President’s visit to Benin (July 28-30, 2019)
President Ram Nath Kovind arrived at the Cardinal Bernadine de Cotonou International Airport in Cotonou, Benin on the first leg of his three nations’ tour to the West African region where he was received by Benin’s Foreign Minister Aurelien Agbenonci. 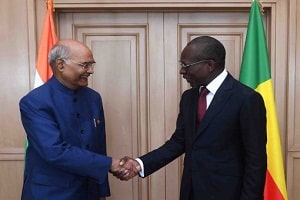 President’s visit to Gambia (July 30- August 1, 2019)
On the second leg of his three-nation tour, President Ram Nath Kovind arrived at the Banjul Airport, Gambia where he was received by the President of the Gambia, Mr Adama Barrow and was accorded a ceremonial welcome. 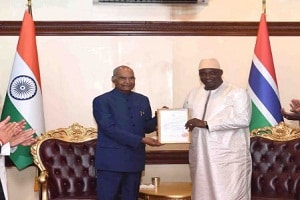 India is the fifth largest investor in Africa

President’s visit to Guinea (August 1-3, 2019)
On the final leg of his three-nation tour, President Ram Nath Kovind arrived at the Conakry Gbessia International Airport where he was received by President of Guinea Alpha Conde along with other dignitaries and was accorded a ceremonial welcome with military honour. 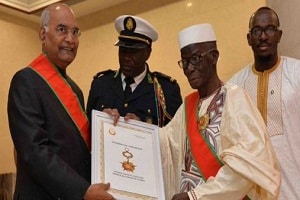 Support to India’s Non-Permanent Membership at UNSC
Guinea expressed its support for India’s candidacy as a non-permanent member of the United Nations Security Council (UNSC) for the term 2021-2022.