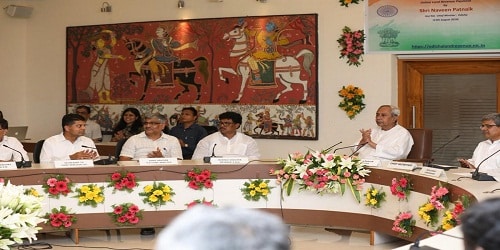 Key points
i. This online payment system was developed at the National Informatics Centre (NIC)- Bhubaneswar, Odisha.
ii. This is the first of its kind initiative of State revenue department of  Odisha under the “5-T mantra”. The 5T mantras are Technology, Transparency, Teamwork, Time and Transformation especially to the newly recruited civil service officers for better governance of the state.
iii. Gandhi talisman: Mahatma Gandhi’s talisman (an object, idol typically an inscribed ring or stone that is thought to have magical powers and to bring good luck) was dedicated as part of his 150th birth anniversary. The talisman is inscribed on a brass plate in both English and Odia language with a neat sketch of the Father of the Nation.

Members present
Veteran freedom fighters Bhavani Charan Patnaik and Nilamani Samal were present.
Karavel Bhavan:
i. The newly constructed Kharavel Bhavan built at a cost of Rs.128 crore by L&T(Larsen & Toubro) on 8.3acres of land in Bhubaneswar was inaugurated by the CM.
ii. 11 departments of the state government will function in this building. And it also houses a lounge and a conference hall for the CM.
iii. The building was named after Kharavela who was a king of Kalinga, the present day Odisha.