Kerala has secured first rank and Bihar has ranked last on this year’s Public Affairs Index (PAI), compiled on basis of a survey by Bengaluru-based think-tank Public Affairs Centre (PAC). The survey was based on 10 themes, 26 focus subjects and 82 indicators.

Public Affairs Index Survey was based on following 10 themes: 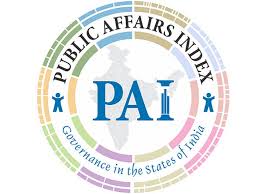 In the overall rankings of large states, Kerala was followed by Tamil Nadu at second position and Gujarat at third position.