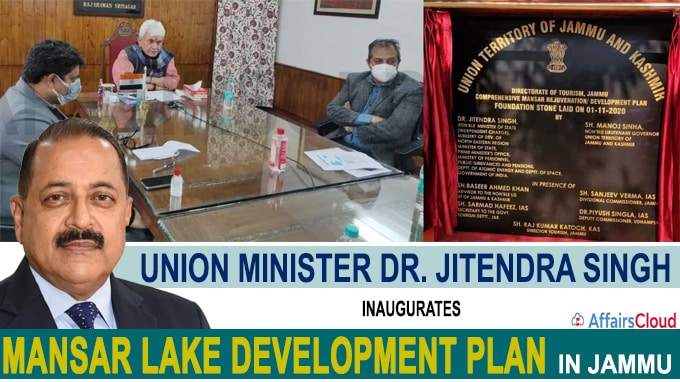 Significance of the plan on its completion

i.On completion of the project, the area of Mansar Lake and its surrounding premises will be developed as a multi-purpose destination, which will attract visitors of various interests.

ii.It will also upgrade Mansar and its surrounding in terms of socio-economic upliftment.

iii.The number of Tourists/pilgrims will increase from around 10 lakhs in the year 2019-2020 to 20 lakhs per year in Mansar region.

v.It will also generate over Rs 800 crore of income per year.

Gist about the Project:

The project comprises the following namely,  Sub-Project/Components like establishment of Tourist Facilitation Centre, Development of Wellness/Naturopathy Centre and Restoration of Mansar Haveli and Narsingh Temple among others.

It is to be noted that the Mansar lake finds its reference in the ancient writings of Mahabharata.

Centre’s Other Initiatives in J&K:

ii.The 1st ever Cannabis Medicine Project at Jammu, will be set up with collaboration of Canada at Council of Scientific & Industrial Research (CSIR)-Indian Institute of Integrative Medicine (IIIM) in Jammu.

iv.4 Circuits that cover 33 locations are being developed in Jammu division, under SWADESH DARSHAN with the cumulative cost of 201.96 crore rupees

v.Rs 706 Crore has been given by the Centre to J&K, to bring it as one of the most preferred tourist destinations in the World Map.