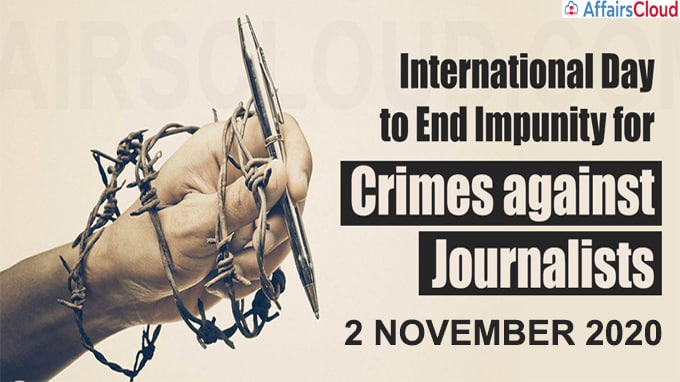 The United Nations(UN) International Day to End Impunity for Crimes against Journalists(IDEI) is observed annually across the globe on November 2 to end impunity(exemption from punishment from the injurious consequences of an action) for crimes against journalists. The day also aims to raise awareness about all attacks against journalists and media workers.UNESCO launches a global awareness campaign “Protect Journalists. Protect The Truth”.

The date, November 2 was chosen to commemorate the assaniation of 2 french journalists namely, Ghislaine Dupont and Claude Verlon in Mali on November 2, 2013.

ii.UNESCO(United Nations Educational, Scientific and Cultural Organization) and the Kingdom of the Netherlands commemorate the World Press Freedom Conference 2020 on 9 and 10 December 2020.

iii.The session on 10 December 2020, entitled “Strengthening investigations and prosecutions to end impunity for crimes against journalists” will include the presentation of guidelines for prosecutors on investigating and prosecuting crimes and attacks against journalists, developed in partnership with the International Association of Prosecutors.

i.The United Nations General Assembly at its 68th session on 18 December 2013, adopted a resolution A/RES/68/163 to proclaim November 2 as the  ‘International Day to End Impunity for Crimes against Journalists’

i.As per the UN, from around 1,200 journalists have been killed from 2006 to 2019 for reporting the news and bringing information to the public.

ii.In 9 out of 10 cases the killers are unpunished.

iii.Since 2006, only about 131 cases of journalists’ killings have been reported as being resolved, representing an overall impunity rate of 88%.

v.The most dangerous country for journalists was Syria, followed by Mexico and Afghanistan.

vi.Many journalists suffer on a  daily basis from non-fatal attacks, including torture in conflict and non-conflict situations.