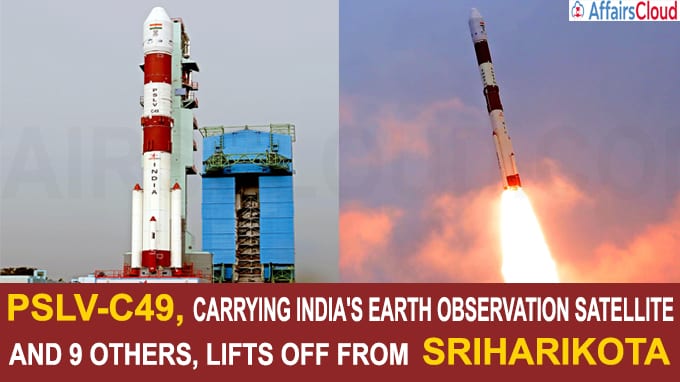 In its first mission of 2020, Indian Space Research Organisation (ISRO) on November 7, 2020 has launched its latest earth observation satellite EOS-01 from Satish Dhawan Space Centre (SDSC) or Sriharikota Range (SHAR), Andhra Pradesh (AP) along with 9 international customer satellites fromLithuania (1), Luxembourg (4), and the US (4). These were carried off by Polar Satellite Launch Vehicle (PSLV)-C49.

EOS-01 is a part of ISRO’s RISAT (Radar Imaging Satellite) series of SAR (Synthetic Aperture Radar) satellites and originally named RISAT-2BR2 but was changed to EOS-1 as per new naming criteria. With an approx. weight of 628-kilogram, EOS-01 is intended for applications in agriculture, forestry and disaster management support with all-weather and day-and-night observation capability.

The customer satellites were launched under a commercial agreement with NewSpace India Limited (NSIL), Department of Space, Government of India. The satellites launched are as follows:

There will be PSLV-C50 to launch satellite CMS-01, followed by the new vehicle SSLV – the first development flight – to launch the EOS – 02 and the GSLV-F10 launch of EOS – 03.

i.Under the ongoing collaboration between the National Aeronautics and Space Administration (NASA) and ISRO, the NASA-ISRO Synthetic Aperture Radar (NISAR) satellite is scheduled to be launched by 2022.