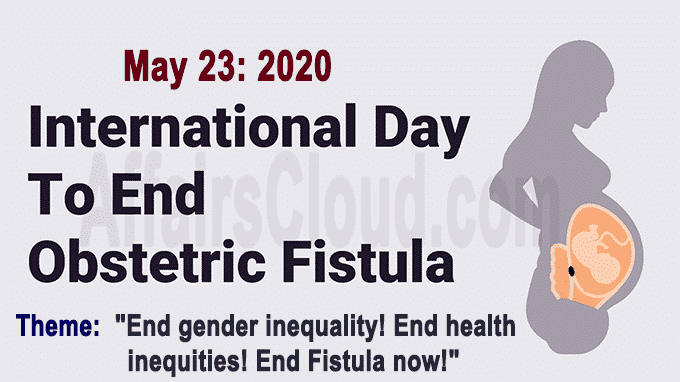 International Day to End Obstetric Fistula is observed every year on May 23 globally to significantly raise awareness and intensify actions towards ending obstetric fistula, as well as urging post-surgery follow-up and tracking of fistula patients. The day was organized by the UN (United Nations).

i.Obstetric Fistula: Obstetric fistula is a medical condition in which a hole develops in the birth canal as a result of childbirth. This can be between the vagina and rectum, ureter, or bladder. It can result in incontinence of urine or faeces.

Complications may include depression, infertility, social isolation and even death if untreated.

ii.Obstetric fistula is preventable and it can largely be avoided by delaying the age of first pregnancy, the cessation of harmful traditional practices and timely access to obstetric care.

iii.Fact: Each year between 50,000 to 1,00,000 women living in sub-Saharan Africa, Asia, the Arab region, and Latin America and the Caribbean are affected by this complexity.

iv.History of the day:  In 2003, the United Nations Population Fund (UNFPA), formerly known as United Nations Fund for Population Activities and its partners had launched a global campaign to End Obstetric Fistula.

v.In 2012, the United Nations announced to celebrate May 23 as International Day to End Obstetric Fistula and the day has been observed since 2013.