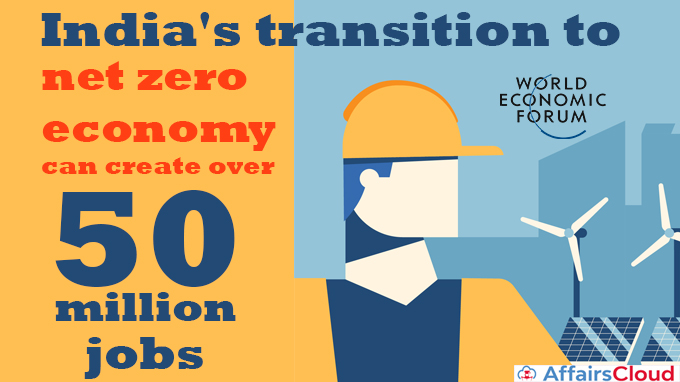 In accordance with the World Economic Forum’s (WEF) latest research report i.e. white paper namely ‘Mission 2070: A Green New Deal for a Net Zero India’ , a Green New Deal for India can add $1 trillion to GDP by 2030, and $15 trillion by 2070 along with a potential of creating more than 50 million new jobs.

i.Green buildings, infrastructure and cities pillar are the next largest source of employment creation.

ii.In India, the population is projected to surpass China’s in 2025 which will result in greater emissions in the future.

iii.As per some projections, India’s GDP may grow above the world average between 2013 and 2040, at about 6.5% per annum.  If this growth is powered by an increased manufacturing base then again there will be more emissions.

As per the paper, India has a once-in-a-generation chance to emerge as a global green innovation hub. This may be achieved via incentives and R&D (Research & Development) subsidies for the private sector, development of green tech business incubators and R&D centres, and attracting innovative foreign businesses.

Kearney in association with WEF (World Economic Forum) released a report titled, ‘Shifting Global Value Chains: the India Opportunity’ states that Coordinated action between the government and the private sector can help create globally competitive manufacturing companies in the country. The report said India’s manufacturing sector exports can help drive more than USD 500 billion in annual economic impacts for the global economy by 2030.