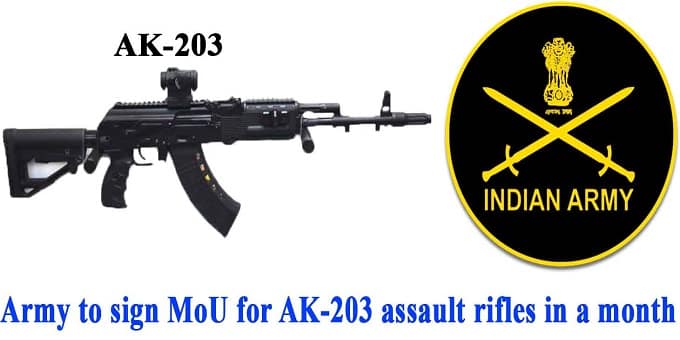 i.The Indo-Russian Rifles Private Limited (IRRPL) at Amethi district’s Korwa town in Uttar Pradesh will manufacture the rifles. The factory is a joint-venture of the Ordnance Factory Board(OFB) of India and Rosoboron Exports and Kalashnikov of Russia.

ii.Stake holdings: OFB holds 50.5% equity and Russia holds the remaining 49.5% stake. The JV was formed by an intergovernmental agreement between India and Russia in February 2019.

iii.CEO of IRRPL: To regulate the timely delivery of rifles, the Army has appointed Major General Sanjeev Senger as the Chief Executive Officer(CEO) of IRRPL.

iv.The Ministry of Defence(MoD) has already floated a request for proposal (RFP) to JV for the supply of 6.71 lakh rifles.

v.Recent SIG-716 Rifle Procurement: The Indian Army (IA) has recently begun inducting 1st batch of 10,000 SIG-716 assault rifles out of the 72,400 assault rifles in addition to AK-203. These SIG-716 rifles were procured under contract worth over Rs 700 crore signed in February 2019 with Sig Sauer company of the U.S. (United States).