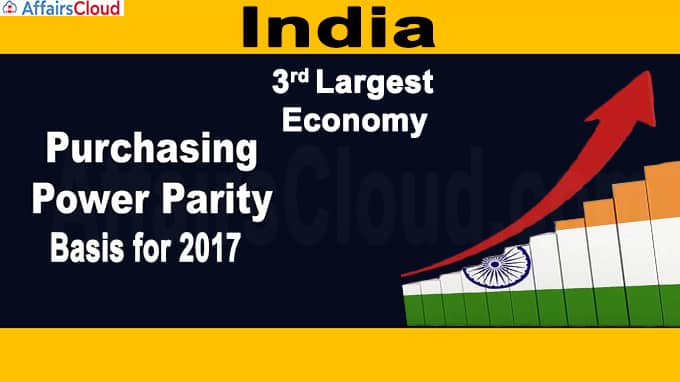 In accordance with the World Bank Data under the International Comparison Program (ICP), revealed by India’s National Statistical Office (NSO) of Ministry of Statistics & Programme Implementation (MoSPI), India has retained its position as the third-largest economy in terms of purchasing power parity (PPP) for 2017 as it accounted for 6.7% or $8,051 billion out of world total of $119,547 billion of global Gross Domestic Product (GDP).

Other Ranking of India

–Asia Pacific Region: India is also the second-largest economy accounted for 20.83% in terms of its PPP-based share in regional AIC and regional GCF where China was at 50.76 per cent (first) and Indonesia at 7.49 per cent (third).

Factors behind India’s 3rd ranking in terms of PPP

It states that exchange rates between currencies are in equilibrium when their purchasing power is the same in each of the two countries. For example- How much milk that Rs 75 can purchase in India and One Dollar can purchase in the US. On this basis (PPP) the GDP of India is measured.

The World Bank released new PPPs for the reference year 2017, under the International Comparison Program (ICP) that adjust for differences in the cost of living across economies of the world. Globally, 176 economies participated in the 2017 cycle of ICP.