In accordance with the Research and Development (R&D) Statistics At a Glance 2019-20 and S&T Indicators Tables 2019-20 based on the national Science & Technology (S&T) survey 2018 brought out by the National Science and Technology Management Information Sysytem (NSTMIS), Department of Science and Technology (DST), India’s gross expenditure in R&D has tripled between 2008 & 2018 and also there is rise in scientific publications. 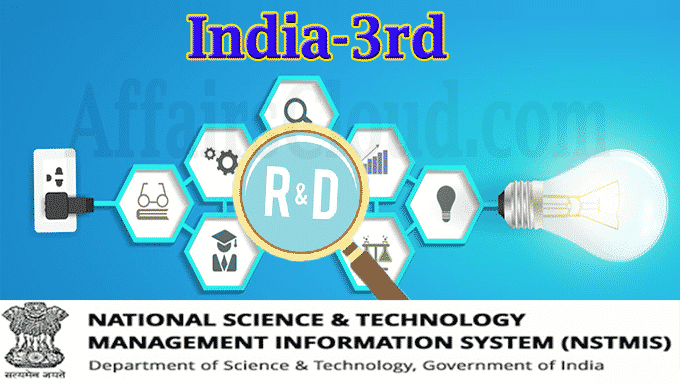 Key Ranks of India, as per report:

Patent Office of India: According to WIPO, India’s Patent Office stands at the 7th position among the top 10 Patent Filing Offices in the world.

-Patent applications filed in India are dominated by disciplines like Mechanical, Chemical, Computer/Electronics, and Communication.

–Department Of Science & Technology (DST) & Department of Biotechnology (DBT) were the two major players contributing 63% and 14%, respectively of the total extramural R&D support in the country during 2016-17.

-Women participation in extramural R&D projects has increased significantly to 24% in 2016-17 from 13% in 2000-01 due to various initiatives undertaken by the Government in S&T sector.

-As on 1st April 2018, nearly 5.52 lakh personnel were employed in the R&D establishments in the country.