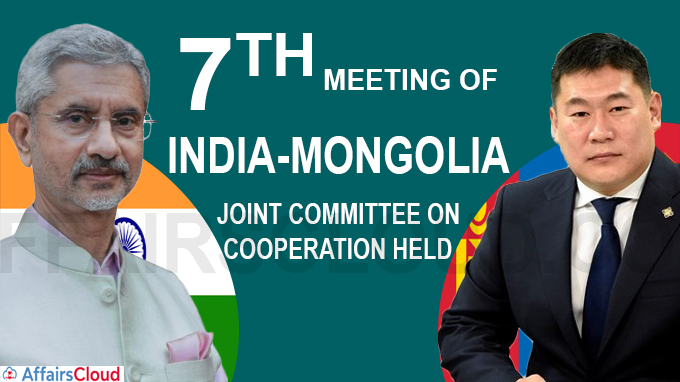 On December 3, 2020 The 7th meeting of the India-Mongolia Joint Committee on Cooperation 2020 was held virtually. It was chaired jointly by Dr. S. Jaishankar, External Affairs Minister, India & Mr. L. Oyun-Erdene, Minister and Chief Cabinet Secretary, Government of Mongolia. Both Countries acknowledged the 65th Anniversary of Establishment of Diplomatic Relations between the two countries.

ii.India handed over 25 volumes of Mongolian Kanjur, a Buddhist canonical text in 108 volumes printed by India under the National Mission for Manuscripts.

iii.Mongolian Kanjur was edited by Prof. Lokesh Chandra & team, which is taken from the collection of Raghu Vira

iv.‘Kanjur’ in Mongolian language means ‘Concise Order’ – works of Lord Buddha. It is one of the most important religious texts in Mongolia.

i.India welcomed Mongolia’s decision to join the International Solar Alliance, initiated by France and India in 2015.

iii.India welcomed Mongolia’s decision to accord ‘visa on arrival’ status for Indian citizens.

Both Countries agreed to hold the next meeting of India-Mongolia Joint Committee on Cooperation in 2021.

i.July 10, 2020, Under the National Mission for Manuscripts (NMM), The Ministry of Culture has taken up the project of re-printing 108 volumes of Mongolian Kanjur.