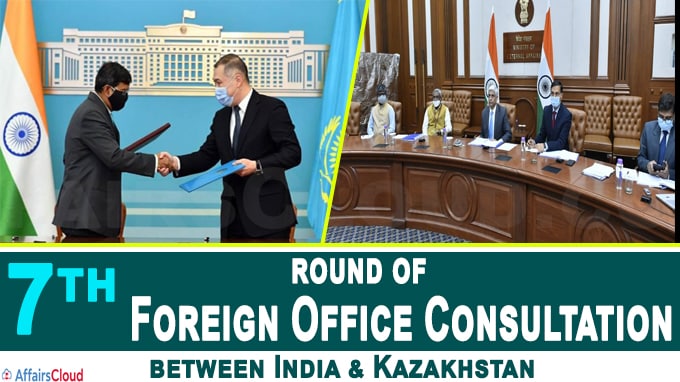 The two sides signed a MoU on “Indian Grant Assistance for Implementation of High Impact Community Development Projects in Kazakhstan”.

i.Both sides reviewed the progress made in bilateral cooperation in areas which fall under the framework of Strategic Partnership.

iii.Both Countries put forth their views and experiences on combating COVID-19 Pandemic.

iv.The two sides discussed their view on regional and international issues of mutual interest, they agreed to enhance cooperation in International forums.

i.As of 2018, The total bilateral trade between India and Kazakhstan amounted to USD 1.2 Billion, exports from Kazakhstan stood at USD 954.08 Million, and exports from India was USD 242.78 Million.

ii.Kazakhstan is the major source of Uranium for India, it supplies 80% of India’s needs.

iii.As part of the India-Kazakhstan nuclear deal, Kazakhstan has supplied 9, 000 tonnes of Uranium to India. Both countries renewed their nuclear deal for a period of 2020-24.

iv.Bilateral relations with Kazakhstan will be vital for India as Kazakhstan plays a major role in Economy of Central Asia.

In 1993, The India-Kazakhstan Inter-Governmental Commission (IGC) was established to develop trade, economic, scientific, technological, industrial and cultural cooperation between the two sides.

ii.Two new Joint Working Groups on Transport & Connectivity and Health are to be set up in the future.

iii.FICCI (Federation of Indian Chambers of Commerce & Industry) and Chamber of International Commerce of Kazakhstan have set up a Joint Business Council (JBC) to promote trade, economic and investment cooperation between two countries.