India and Bahrain signed an agreement to strengthen their ties in key areas like trade and counter-terrorism. The India-Arab League Cooperation Forum meeting was held in Bahrain. The meeting was held between the Indian External Affairs Minister Sushma Swaraj and Bahrain’s Foreign Minister Khalid bin Ahmed Al Khalifa. 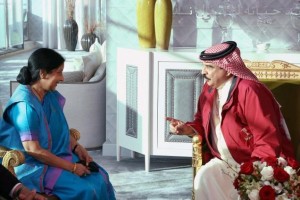 Highlights about the Tie

Other Events of the Bahraini Visit