On December 19, 2019 the International Astronomical Union (IAU) has announced new names of its newly discovered star and its planet. The star ‘HIP 7943’ was named as “Sharjah” and one of its planet (exoplanet) was named as “Barjeel”. The announcement for the selection of name was made during a press conference of IAU in Paris, France during the centenary celebration of the union (IAU) on July 28, 2019. 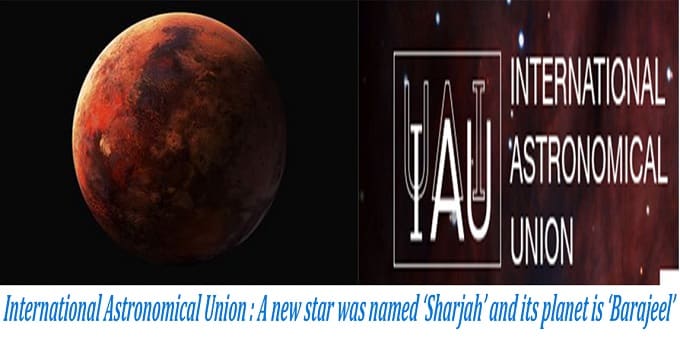 Naming of the planet:

i.To Name the star and the planet, nearly 3,60,000 proposals were received by the IAU. The IAU national committee from 112 countries shortlisted the proposals.

ii.Star ‘Sharjah’: Appreciating the achievements of Sharjah city, which is the Capital of Arab Culture, Capital of Islamic Culture and also has the name of World Book Capital, the star was named as “Sharjah”.

iii.Barjeel meaning: A barjeel is a wind tower that directs the flow of wind, where the air can be recirculated as a form of air conditioning. Barjeel is an exoplanet to Sharjah. Planets orbiting their stars are called exoplanets.

iv.Sharjah city: Sharjah city is the cultural capital of United Arab Emirates(UAE). It is considered as the city of knowledge due to its educational centers, institutes, museums, libraries and heritage centres.