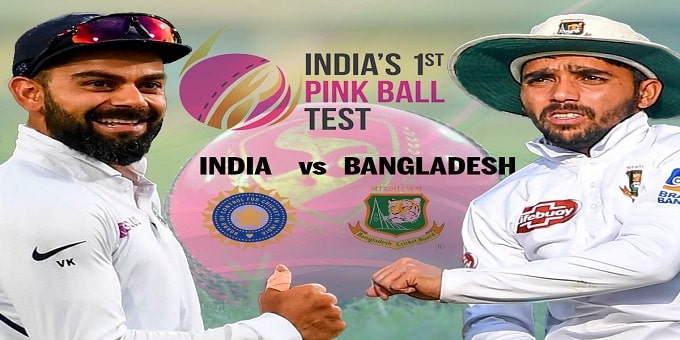 Pink Ball Test: India defeated Bangladesh, record 12th successive series win at home
On November 22, 2019, India defeated Bangladesh by an innings and 46 runs in their first ever day-night Test match and first match played with a SG pink ball manufactured by the SG(Sanspareils Greenlands) factory of New Delhi. The match was held at Eden Gardens stadium in  Kolkata, West Bengal. India recorded its 12th home series win in a row. India also became the first team to win 4 tests in a row by an innings margin.

Pink ball: In the pink ball, the dyed leather is coated with the pink colour pigment. So far, red-colored ball has been used in the test matches.The first pink ball was manufactured by Australia’s ball manufacturing company ‘Kookabura’. Australia was the only country to fully adopt the pink ball and the only team to have played five pink ball Test matches.

ii.Wriddhiman Saha- 5th Indian wicket-keeper to affect 100 dismissals in Tests:
India’s Wriddhiman Saha became the fifth Indian wicket-keeper to affect 100 dismissals in the longest format of the game. The feat was achieved during the second test match between India and Bangladesh at the Eden Gardens stadium.