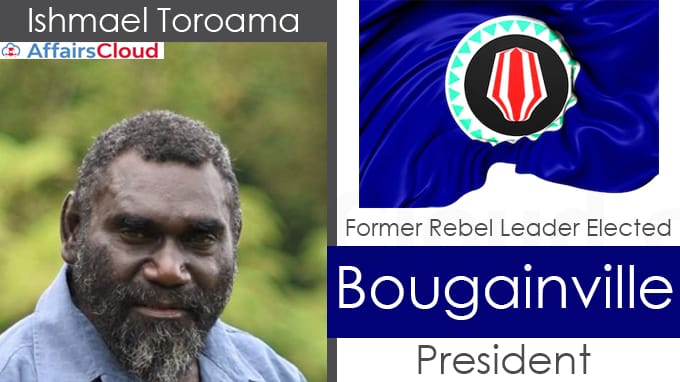 i.This is the first General Election of Bougainville since its independence from PNG in December 2019.

ii.Toroama defeated 24 candidates with 48766 votes, under the preferential voting system, the absolute majority has fallen to 39728.

ii.He worked towards the peace and disarmament process.

iii.He helped to broker the Bougainville Peace Agreement which was signed in 2001 which played a major role in the disarmament process.

i.Bouganville, a group of Islands in the South Pacific, is an economically developing country which faced a 10 year long civil war (1988 – 1998).

ii.The Bougainville Civil War or Bougainville Conflict was over how to share the profits of the gold and copper mines in Bougainville and the environmental damages due to the mining.

iii.As a part of the peace process a non-binding independence poll was conducted which ended the conflicts of Bougainville.

i.63-years-old Tsai Ing-wen, the current and first female President of Taiwan has been re-elected for a second four-year term of presidency. A representative of Democratic Progressive Party (DPP), took the oath on May 20, 2020.