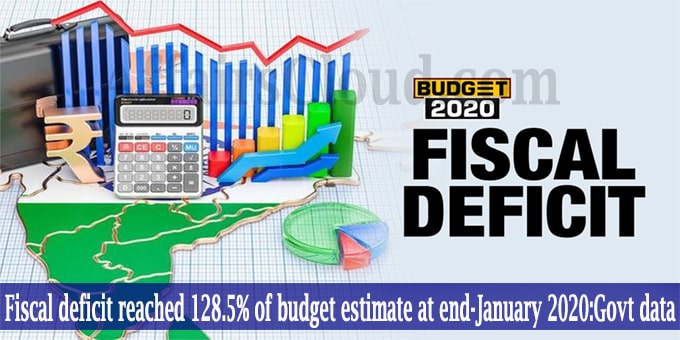 i.Expenditure and receipts: According to CGA, the total expenditure till the end of January 2020 was Rs 22.68 lakh crore, which is 84.1 % of the revised estimate. It was 81.5 % in the same period a year ago.
While, the net tax receipts in the April-January period were Rs 9.98 lakh crore.

ii.Fiscal deficit estimated at 3.8 %in the budget: The government has set a budget estimate of Rs 7,66,846 crore for the fiscal year ending March 31, 2020. In the budget presented in Parliament earlier in February 2020, Finance Minister Nirmala Sitharaman raised the fiscal deficit estimate for the current fiscal from 3.3 %to 3.8 %. The reason for this is stated to be a decrease in revenue collection.

About CGA (Controller General of Accounts (CGA):
CGA,under the Department of Expenditure, Ministry of Finance, is the Principal Accounting Adviser to Government of India and is responsible for establishing and maintaining a technically sound Management Accounting System.
Current CGA– Smt. Soma Roy Burman.