We are here for you to provide the important current affairs October 23 2017 which have unique updates of all daily events from all newspapers such as The Hindu, The Economic Times, PIB, Times of India, India Today, Indian Express, Business Standard, all Government official websites. Our complete current affairs helps you to get more marks in Banking, insurance, UPSC, SSC, CLAT, Railway and all other competitive Exams. Haryana to introduce ‘PGs for cattle’ to boost milk production
On October 22, 2017, Haryana State Government announced to set up ‘PGs (Paying Guests) for cattle’, through which people living in high-rises or in urban areas will be able to rear their own cattle and produce quality milk for their personal consumption.
i. Under this initiative, Haryana State Government will earmark 50 to 100 acres of land for dairy business.
ii. In such earmarked areas, there will be two types of dairies – one will be traditional and the other will be set up as ‘PGs for cattle’.
iii. People who live in high rise buildings in a big city where rearing cattle is not possible, but still want to consume milk of their own cow or buffalo, can rear their own cattle and get quality milk by taking up plots reserved for ‘PGs for cattle’ in the earmarked dairy areas.
iv. Haryana Government is taking several measure to boost dairy industry in the state with an objective to make Haryana as the best state in milk production. 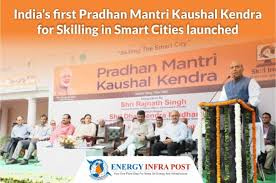 About India’s First Pradhan Mantri Kaushal Kendra for Skilling in Smart Cities:
i. This centre, located at Mandir Marg, New Delhi, is an exemplary heritage building of approx. 30,000 sq.ft.
ii. It has a capacity of skilling 4000 youth annually and caters to healthcare and solar energy sectors.
iii. The centre will be managed by Orion Edutech, which is National Skill Development Corporation (NSDC) affiliated training partner.
iv. Orion Edutech has trained nearly 3 lakh candidates through its network of over 275 skill development centres across India.

State of World Population 2017 Report launched
As per the recently released State of World Population 2017 report by the United Nations Population Fund, prevailing inequality between rich and poor has to be tackled on an urgent basis and poorest and most vulnerable women will have to be empowered to make their own decisions about their lives. On failing to do so, countries across the world could face unrest and their development will be hampered.
i. The report has been titled “Worlds Apart: Reproductive Health and Rights in an Age of Inequality.”
ii. As of 2017, half of 1.6 billion women of reproductive age living in developing regions want to avoid a pregnancy.Around 59 million women use unreliable traditional methods of pregnancy prevention whereas 155 million use no method of contraception at all…………………………..Click here to Read More 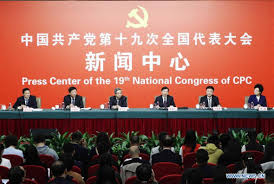 About 2nd World Congress on Marxism:
i. The theme of 2nd World Congress on Marxism will be  “Marxism and the current world and China”. 17 sub forums will be held covering topics like Chinese solution and modernization approach by the developing countries.
ii. More than 300 Marxism researchers are expected to attend this conference. Discussions will revolve around Marxism in the 21st century and its developments in China.
iii. The 2nd World Congress on Marxism coincides with the 200th anniversary of Karl Marx’s birth and 40th anniversary of China’s reform and opening-up.
iv. Organisers of this Congress believe that through this event the world academic circle will get an opportunity to interpret “China road, China theory and China experience” in context of Marxism.

PMLA: Banks to now match original IDs with photocopies
As per the latest notification issued by Department of Revenue under the Finance Ministry, banks and financial institutions will have to mandatorily check the original identification documents of individuals dealing in cash above the prescribed threshold.
i. As per the notification, in case the identification document does not contain updated address, a utility bill like electricity, telephone, post-paid mobile phone, piped gas or water bill which is not more than two months old can be considered as a proof of address.
ii. This notification by Department of Revenue is an amendment to the Prevention of Money-laundering (Maintenance of Records) Rules.
iii. Prevention of Money-laundering Act (PMLA) is Indian Government’s framework to curb money laundering and generation of black money.
iv. Reporting entities like banks, financial institutions and intermediaries have to comply with PMLA guidelines by verifying identity of their clients, maintain records of their transaction and furnish information to Financial Intelligence Unit of India (FIU-IND) in specified format.
v. For various financial transactions such as cross border wire transfer, purchase/sale of immovable property and cash dealing, a specific threshold amount has been prescribed, above which such transaction have to be mandatorily reported. 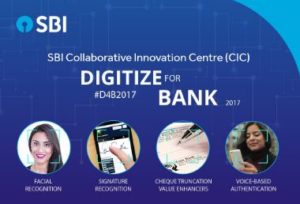 About ‘Digitise For Bank’ Hackathon:
i. ‘Digitise For Bank’ hackathon will be held from 1st – 12th November, 2017.
ii. It is presented by SBI Collaborative Innovation Centre (CIC).
iii. This edition focuses on four ‘Cognitive’ themes viz. Facial Recognition, Signature Recognition, Voice based Authentication and Cheque Truncation Value Enhancers.
iv. This Hackathon seeks to bring out innovative ideas and solution based on digital technologies and automation  to counter challenges faced by Banking sector such as identity fraud, problems with signature validation and lack of multi-form authentication.
v. The winners of ‘Digitise For Bank’ hackathon will get an opportunity for incubation and acceleration with SBI.
Quick Facts about State Bank of India (SBI):
♦ Funded in – 1955
♦ Headquarters – Mumbai
♦ Current Chairman – Rajnish Kumar

BHEL starts execution of 4,000 megawatt Yadadri plant in Telangana
On October 23, 2017, Bharat Heavy Electricals Limited (BHEL) announced that it has commenced execution of Yadadri supercritical thermal power project ordered by the Telangana State Power Generation Corporation Ltd. (TSGENCO).
More Details about BHEL’s Yadadri plant in Telangana:
i. The project is located at Damaracherla in Nalgonda district of Telangana and is valued at approximately Rs 20,400 crore.
ii. It has all the necessary environmental clearances and is compliant with the revised emission norms.
iii. This is the single largest order for BHEL so far and is also the highest value order ever placed in the power sector in India.
iv. BHEL is already executing 800 MW Kothagudem and 1,080 MW Bhadradri power projects of TSGENCO.
Quick Facts about Bharat Heavy Electricals Limited (BHEL):
♦ Founded in – 1964
♦ Headquarters – New Delhi
♦ Current Chairman and MD – Atul Sobti

i. Gitanjali after winning will take home US$25,000 for her innovative idea, which she said that she developed approximately five months ago in response to learning about the ongoing water crisisin Flint, Michigan.
ii. “The idea just came to me when I saw my parents testing for lead in our water,” she told.
iii. Lead-contaminated water is a problem for more than 5,300 water systemsin the US, according to 2016 data.
iv. If people want to test their water, they generally rely on one of the two methods.
v. They can either use lead-testing strips, which are fast but not entirely accurate or they can send the water to the EPA for analysis, which is time-consuming and requires expensive equipment, she explained. She wanted to devise a smarter, more effective solution and that’s how she worked on this new idea.
vi. She added that she wanted to be either a geneticist or epidemiologist when she grows up.

Government appoints ex-IB chief Dineshwar Sharma as interlocutor
Dineshwar Sharma, the Former director of the Intelligence Bureau (IB), has taken charge as the interlocutor, for peace talks with Assam’s insurgent groups, including the United Liberation Front of Assam (ULFA).
ii. Dineshwar Sharma was already posted in Kashmir in early 1992, when militancy there was at its peak.
iii. Thereafter, he handled Kashmir issue from IB headquarters in Delhi. He was also director of IB between December 2014 to 2016.
iv. Home Minister Mr. Rajnath Singh addressed to the media that the rank of the former IB Director, Dineshwar Sharma, will be equivalent to that of a Cabinet Secretary.
v. When he was asked if separatists would be invited to be part of the talks process, the minister said the interlocutor will have the discretion to decide who all should be engaged in the talk process.
vi. He also added, the Centre’s dialogue will be open to all and the responsibility is on the separatists to join in.
vii. He also said that appointment of Dineshwar Sharma came in after PM Modi had underlined BJP’s policy and intention towards the unrest prevailing in Jammu and Kashmir.
INTELLIGENCE BUREAU
♦ Formed – 1887
♦ Headquarters – NewDelhi
♦ Parent Agency – Ministry of Home Affairs 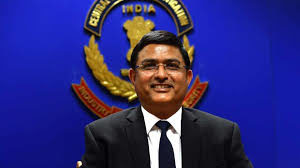 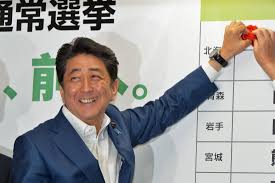 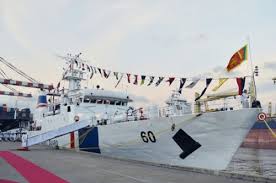 About SLCGS Suraksha:
i. SLCGS Suraksha is an Offshore Patrol Vessel (OPV) provided by the Indian Coast Guard to the Sri Lanka Navy.
ii. During its tenure with Indian Coast Guard, this OPV was named ‘Varuna’. It was formally handed over to Sri Lankan Navy in September 2017.
iii. The OPV has a displacement of 1,160 tons, is 74.10m in length and 11.4m in breadth. It can sail at a speed of 22 nautical miles per hour can cover 8,500 nautical miles maintaining a speed of 16 nautical miles per hour.
iv. SLCGS Suraksha will be used by Sri Lankan Coast Guard for patrolling and surveillance in Sri Lanka waters, prevention of maritime pollution, training purposes and for humanitarian assistance and disaster response operations.

NASA extends Dawn mission at dwarf planet Ceres
National Aeronautics and Space Administration (NASA) has announced a second mission extension for Dawn spacecraft which is currently in an orbit around dwarf planet Ceres. Dwarf planet Ceres is the largest object in the asteroid belt (located between the orbits of Mars and Jupiter).
i. Dawn arrived in orbit around Ceres in 2015 and thereafter provided important information to scientists that helped in understanding its properties.
ii. Primary mission of Dawn ended in June 2016,  however till date it remained in orbit around the dwarf planet and continued to monitor and study its surface.
iii. With this latest mission extension, Dawn’s flight team will try to take it in a new orbit around Ceres, which could take it to less than 120 miles above its surface.
iv. During earlier mission tenures, lowest orbit attained by Dawn was within 240 miles above the surface of Ceres.
v. Gamma ray and neutron spectrometers on Dawn will be used to study the upper layer of Ceres’ crust to see how much ice it contains. 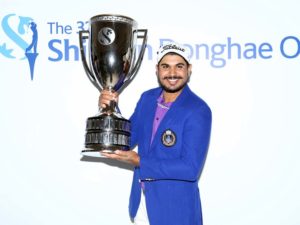 i. This was eighth Asian Tour title of Gaganjeet’s career and his first title this year.
ii. In the finals, Gaganjeet was leading with four shots which reduced to one in round three. However he drained five birdies on the front nine and won by three shots.
iii. He had last won Macao Open in 2012.
iv. Other Indian Golfers Ajeetesh Sandhu and Filipino Angelo Que shared second place. Taiwan’s Hung Chien-Yao managed to finish fourth.
v. First edition of Macao Open was held in 1998.