We are here for you to provide the important current affairs may 9 2017 which have unique updates of all daily events from all newspapers such as The Hindu, The Economic Times, PIB, Times of India, India Today, Indian Express, Business Standard, all Government official websites. Our complete current affairs helps you to get more marks in Banking, insurance, UPSC, SSC,CLAT , Railway and all other competitive Exams. 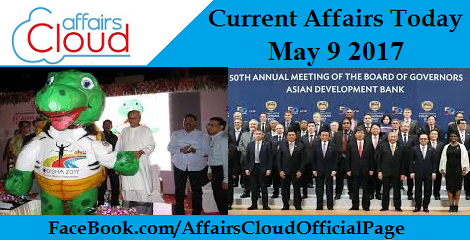 SAMADHAN – Rajnath Singh coins an acronym to wipe out left-wing terror
A meeting of the Chief Ministers of states affected by Left-Wing Extremism (LWE), presided over by Union Home Minister Rajnath Singh was held in New Delhi on May 8, 2017.
i. In this meeting, Mr. Rajnath Singh announced SAMADHAN, a new strategy to wipe out left – wing terror.
ii. Other Govt. functionaries who attended the meeting included Ajit Doval – National Security Adviser, Rajiv Mehrishi – Union Home Secretary, Director of Intelligence Bureau, State Heads of Police Department and Heads of the Central Forces.

29th India- Indonesia Co-Ordinated Patrol (Corpat) Commences
The 29th series of India–Indonesia CORPAT is scheduled from 9th to 25thMay 17.
Key Notes:
i. The opening ceremony being conducted from 09 -12 May 17 at Port Blair.It will be conducted under the aegis of Andaman and Nicobar Command.
ii. The Coordinated Patrol serves to enhance mutual understanding and inter–operability between the two navies.
iii. The Indonesian Naval Ship KRI Sutedi Senoputra has arrived at Haddo Wharf, Port Blair to mark the commencement of the 29th series of IND–INDO CORPAT.
iv. The closing ceremony of the CORPAT is scheduled at Belawan, Indonesia from 22 – 25 May 17. 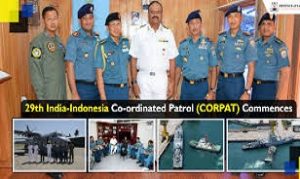 Centre tells States to link Prisons with Courts via video
The Centre has asked all states to link prisons with courts through video conferencing.
Key Points:
i. The prison e-system should be integrated with Crime and Criminal Tracking Network and Systems (CCTNS) as well as e-courts on priority basis.
ii. Combined training of prison, police, health department and judiciary on undertrial management should be conducted periodically.
iii. To save cost the prisons should be linked with courts through video conferencing for expeditious trial.
iv. It is aimed to having an effective prison administration system.Separate training course on deradicalisation of prisoners should also be conducted.

Supreme Court sentences Justice Karnan to 6 months imprisonment
The Supreme Court sentenced Calcutta high court judge C.S. Karnan to six-month imprisonment.
Key Points:
i. It had been declared by a seven-judge bench headed by chief justice of India S. Khehar.
ii. On 1 March, the apex court had ordered a Calcutta government hospital to constitute a medical board, examine his condition and submit a report to the court by 8 May. 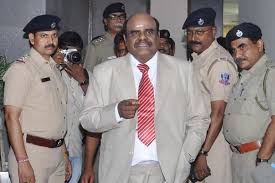 iii. The medical board was to be assisted by the West Bengal director general of police (DGP) and a team of police personnel in carrying out the directions passed by the court.
iv. Karnan had refused to undergo the medical examination.
v. He issued an order of sentencing eight judges of the Supreme Court to five years of “rigorous imprisonment” and imposed a fine of Rs 1, 00,000
vi. The apex court had in February issued a contempt notice to the judge, who had accused several judges of corruption, nepotism and casteism.

India unanimously elected to head UN-Habitat, the United Nations’ Human Settlements Programme
India has been unanimously elected as the President of UN-Habitat for next two years. UN-Habitat is an organ of United Nations, which promotes environmentally and socially sustainable global human settlements. In the past, India held the presidency of UN-Habitat in 1988 and 2007.
i. Consequential to India being elected as President of UN-Habitat, Venkaiah Naidu – Union Minister of Housing & Urban Poverty Alleviation chaired the 26th Meeting of the Governing Council of UN-Habitat which began in Nairobi, Kenya on May 8, 2017.
ii. Theme of 26th Meeting of the Governing Council of UN-Habitat was “Opportunities for effective implementation of the New Urban Agenda”. 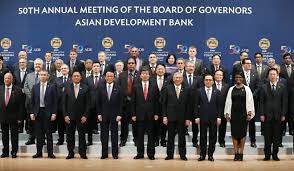 i. 50th annual meeting of the Asian Development Bank (ADB) Board of Governors held  from 4th – 7th May 2017 in Yokohama, Japan with the theme “Building Together the Prosperity of Asia”
ii. Both the countries have affirmed plans to strengthen their military cooperation amid rising tension in the Asian region.

Philippines, US begin smaller-scale joint military exercises
Philippine and U.S. troops begin smaller scale joint military exercise. It major focus will be on disaster response, humanitarian assistance and counter terrorism.
Key Highlights:
i. “Balikatan” or “Shoulder-to-Shoulder” 12 day military exercises were led by Defense Secretary Delfin Lorenzana and U.S. Ambassador Sung Kim.
ii. This year’s exercises will be based on a scenario of troops responding to a super typhoon hitting the Philippines.
iii. The 5,400 personnel 2,600 Americans and 2,800 Filipinos will take part.It will be held at the Philippine military’s headquarters in metropolitan Manila.
iv. The two countries are conducting the yearly training for the 33rd time.To ensure coordination and interoperability of their forces.
v. Small contingents from Japan and Australia are also participating this year.
About Philippines
♦ Philippines Capital -Manila
♦ Philippines Currency- Peso
♦Philippines President- Rodrigo Duterte which will be communicated via SMS.
v. Customers will receive a message stating their eligibility for cash-back and will subsequently receive upto 25 percent cash-back basis.
Yes Bank:
♦  Headquarters: Mumbai
♦  CEO: Rana Kapoor

Ola ties-up with Airtel to roll out integrated digital offerings to customers
Bharti Airtel has announced a strategic partnership with taxi aggregator Ola.
Key Notes:
i. It aims to offer a range of exciting digital services to customers.
ii. Airtel Payments Banks, India’s first payment bank, will join hands with Ola app to offer convenient digital payments solutions to customers for their rides.
iii. Ola Money is one of the India’s largest mobile wallets. It will be integrated as a digital payment solution within MyAirtel App.
iv. To enable recharge of Airtel prepaid mobile/DTH and payment of Airtel mobile/broadband bills through Ola Money.
v. It will mainly address India’s growing communication and mobility needs. 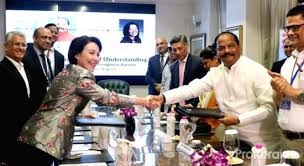 ii. Oracle will support by its vast portfolio of technology solutions including Oracle Cloud.
iii. It will also help in building start up centers and aimed at increasing employment and alleviate poverty.
iv. It will bring smarter, transparent and efficient governance within the state of Jharkhand.
v. Its major work is to identify the areas in which Oracle’s latest cloud-based technologies can be used.
vi. It will deliver improved citizen services and to address the state’s citizen and business requirements. 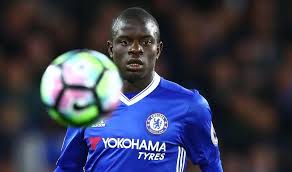 ii. N’GoloKante is a French professional footballer.
iii. The 26-year-old Kante will receive the prestigious FWA accolade at London on 18 May 2017.
iv. He plays as a central midfielder for English club Chelsea and the France national team.
v. He was born on 29 March 1991.He made his senior international debut for France in 2016.

Venu Rajamony appointed India’s ambassador to Netherlands
Venu Rajamony a Press Secretary to President Pranab Mukherjee and senior diplomat has been appointed India’s Ambassador to the Netherlands.
Key Points:
i. Rajamony will also be India’s Permanent Representative to the Organisation for Prevention of Chemical Weapons.
ii. Headquarter of Organisation for Prevention of Chemical Weapons is in The Hague Netherland.
iii. He has served in the Indian Mission in Hong Kong and done two terms in the Indian Embassy in Beijing.
iv. He joined the Indian Foreign Service in 1986.
v. In 1996, he was also selected for the UN Commission on Human Rights representing India.
Netherlands :
♦ Capital: Amsterdam
♦ Currency: Euro

iv. An AFI (Athletic Federation of India) team was in the state capital to inspect the venue.
v. The winners will directly qualify for the World Championship in London, to be held from August 4 to 13.
vi. India’s sprint queen PT Usha, Anju Bobby George attended the program.

Time of Remembrance and Reconciliation observed for victims of World War II
Time of remembrance and reconciliation was observed globally on 8-9 May 2017.
Key Notes:
i. UN Day pays tribute to victims of Second World War.
ii. The day was designated by the UN General Assembly by resolution 59/26 of 22 November 2004.
iii. It was established on 24 October 1945.