We are here for you to provide the important current affairs May 28 2018 which have unique updates of all daily events from all newspapers such as The Hindu, The Economic Times, PIB, Times of India, India Today, Indian Express, Business Standard, all Government official websites. Our complete current affairs helps you to get more marks in Banking, insurance, UPSC, SSC, CLAT, Railway and all other competitive Exams. Salient Features:
i. It is the largest and busiest airport of Kerela and was constructed in 1999.
ii. The airport has 46,150 solar panel across 45 acres of land in the cargo complex of the airport. It produces 15MWp solar power.
iii. This airport consumes 50000 units of electricity daily and is completely dependent on solar power.
iv. It saves 3 lakh tonnes of carbon dioxide emissions and runs on green technology.
v. This plant is equivalent to 30lakh trees.
vi. It was the first airport to be built in public private partnership (PPP).
About United Nations Environment Programme (UNEP):
It was founded by United Nations Conference on Human Environment in June 1972. Its headquarters is in Nairobi, Kenya. This Body of the UN promotes environmental developments partnered with organizations and governments to fulfill the Sustainable Development goal. 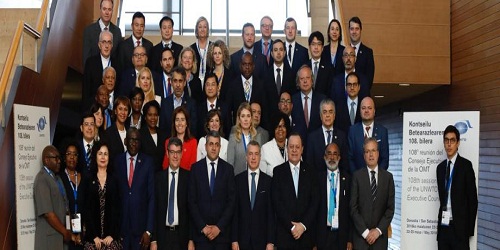 108th session of UNWTO Executive council:
i.  K. J. Alphons chaired the ‘Programme and Budget Committee’ meeting of UNWTO. He also met with the Secretary-General of UNWTO, Mr. Zurab Pololikashvili and discussed on creating a Joint Action Plan focused on Tourism Innovation and Digital Transformation and positioning of India on this Action Plan.
ii. Discussions were also made to improve the relationship between India and UNWTO. The Indian delegation also took part in the thematic discussions on ‘Tourism and Digital Transformation’
iii. K. J. Alphons also met the Tourism Minister of Spain, Mr. Álvaro Nadal and discussed cooperation in tourism.
iv. The discussions were focused on synergy between India’s Iconic Destinations and Spain’s Smart Destinations, Setting up of Centre of Excellence for Tourism Technology, Training programme for Tourism professionals (Central/State employees) Management of Pilgrim Destinations and also management of UNESCO Heritage sites.
v. The UNWTO Executive Council conducts meetings at least two times a year. The next meeting is to be held in Bahrain.
About World Tourism Organization (UNWTO):
♦ Secretary-General – Zurab Pololikashvili
♦ Headquarters – Madrid, Spain
♦ Purpose – promotion of responsible, sustainable and universally accessible tourism Objective:
It will be organized with the aim to focus on innovations for harnessing wind energy with green technology.
Salient Features:
i. It will be a four day event where about 100 countries will be participating including India, China , The US, Spain, Denmark.
ii. The conference will be the largest event on Wind industry worldwide  and will consist of 2 parts: WindEnergy Hamburg and WindEurope.
iii. It will have 1400 exhibitors and 250 speakers from all around the world.
iv. It will focus 3 main subjects : Dynamic markets, Cost-efficiency and smart energy.
v. This will entail how to develop markets and competitiveness and use the wind energy in all applications.
vi. The government of India has a target of installing 60GW of wind energy by 2022 and India (33GW till now ) is the fourth largest country after China, US and Germany who has already installed wind energy.
Germany :
♦ Capital:Berlin
♦ Currency : Euro
♦ Prime Minister:Angela Markel

India, US, Japan start 22nd Malabar exercise in Guam
On May 28,2018, India, US and Japan will take part in Malabar exercise  in Guam.
Objective:
The exercise will mainly focus on the anti-submarine warfare.
Salient Features:
i. From India’s side , its stealth frigate INS Sahyadri, missile corvette INS Kamorta and fleet tanker INS Shakti and a P-8I long-range maritime patrol aircraft will take part in the exercise .
ii. From the US side, a nuclear powered super carrier USS Ronald Reagan of 10000 tonne and F/A 18 fighters and  a nuclear attack submarine and P-8A patrol aircraft.
iii. From Japan’s side , one of 27000 tonne helicopter carriers , a Soryu class submarine and Kawasaki P-1 maritime aircraft will participate .
iv. Australia was earlier considered a part of the exercise but was ruled out due to China’s opposition.
About Malabar exercise:
It is a trilateral exercise between India, US and Japan and past non-permanent participants were Australia and Singapore. The annual exercise began in 1992.

Qatar bans goods from UAE, Saudi, Egypt and Bahrain
On May 28,2018, Quatar announced that it was banning products from United Arab Emirates (UAE) , Saudi Arabia, Bahrain and Egypt .
Objective:
To protect safety of consumers in the state of Quatar , to stop trafficking of goods.
Salient Features:
i. The four states cut all diplomatic relations with Quatar on wake of Doha supporting terror financing.
ii. There is no such estimation on the number of products been banned but all products trans-shipped through embargo states and products produced in them were banned.
iii. Quatar has developed new shipping routes through places like Oman and have started producing things locally including food.
Quatar:
♦ Capital: Doha
♦ Currency : Quatari Riyal.

RBI allows Rupee Co-op Bank to continue banking services under restriction till August 31,2018
On May 28,2018, the Central Bank of India,  Reserve Bank of India (RBI) has instructed  the Rupee Co-op Bank of Pune to continue its banking services keeping the limitations in mind.
Key points:
i. Restriction were first imposed on February 22 ,2103 to August 2013 and that was extended 8 times till May 2018.
ii. RBI has further extended the restrictions for further 3 months till August 31 2018.
About Rupee Co-op Bank:
It is headquartered in Pune Maharashtra. It has 40 offices / branches across the state. 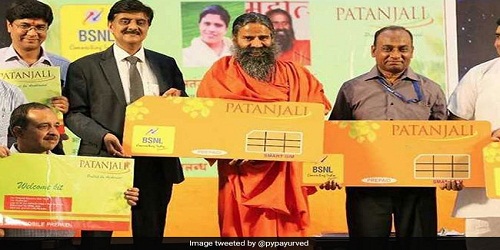 Swadeshi Samriddhi SIM cards:
i. At the beginning, only the employees and office bearers of Patanjali can avail the benefits of the Swadeshi Samriddhi SIM card.
ii. After the full-fledged launch, people can avail a 10 % discount on Patanjali products using this card.
iii. A user can recharge for Rs 144, and can make unlimited calls all over India, use 2 GB data pack and send 100 SMSs.
iv. The card also offers medical and life insurance covers of Rs 2.5 lakh and Rs 5 lakh, respectively. The covers can be availed only in case of road accident. 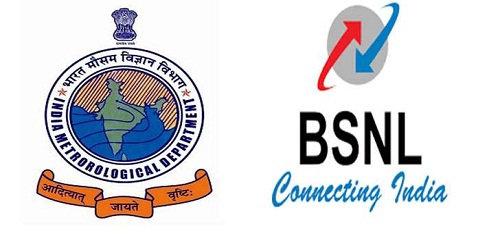 Objective :
To send extreme weather warnings to the public.
Salient Features:
i. Under harsh weather conditions IMD will send alerts to the BSNL and BSNL with the help of its technology will send the alerts to the registered numbers in the Delhiregion.
ii. Area specific alerts will be given as well to other telecom circle subscribers belonging to the area.
iii. It is in an experimental stage and on successful operation will rope in other weather organizations as well.
iv. The government agencies have limits to which  they can spread alerts especially for thunderstorms.
About IMD:
It is also known as the Met Department as is under the Ministry of Earth Sciences , Government of India. It was established in 1875. Headquartered in Delhi.

Tata Trusts’ MOU with government to provide development support in Naxal-hit districts under governments ‘Transformation of Aspirational Districts’ programme
On May 28,2018, 8 Naxal hit districts of Chattisgarh are to be developed by the government with the help of TATA Trust.
Objective:
To provide technical and human resource assistance to the special development programme launched by the NITI Aayog.
Salient Features of the MOU:
i. This initiative is taken under the ‘Transformation of Aspirational Districts’programme.
ii. Tata Trusts will be conducting surveys and provide technical support for better living standards of these districts.
iii. The 8 worst hit districts are :Bijapur , Kanker, Bastar, Rajnandgaon, Dantewada, Kondagaon, Narayanpur, Sukma.
iv. Special Central Assistance Scheme of Rs.33 Crorehas been set aside for the emergency and public infrastructure .
v. District Mineral Funds and Corporate Social Responsibility (CSR) are available for resources.
About Transformation of Aspirational Districts’ programme:
It aims to quickly and effectively transform some of the most underdeveloped districts of India. Over 100 districts have been recognized under this scheme.

SECI named nodal agency to set up 2.5GW wind-solar hybrid project
On May 27,Solar Energy Corporation of India(SECI) was named as the Nodal Agency to set up 2.5 GW Wind-Solar hybrid Project by the Ministry of  New and Renewable Energy.
i. The Objective of the Scheme is to Build the Hybrid Projects with the Transparent Bidding Process.
ii. The Bidding process is limited from 200 MW to 500 MW,in which 1 project site must have atleast capacity of 50 MW.
iii. Earlier,the Government of India had set the to produce 175 GW renewable energy capacity by 2022.As of now we have only 20 GW of renewable energy produced through wind-solar hybrid power projects. Pakistan appoints former chief justice Nasir Ul Mulk as interim PM:
i. Nasir ul Mulk is 67 years old. He is expected to take charge as interim prime minister of Pakistan on 1stJune 2018.
ii. Earlier, he served as lawyer and judge for several years. In 2014, he became the 22nd Chief Justice of Pakistan.

Ali Jahangir Siddiqui to take charge as Pakistan’s ambassador to US on May 29
i. On May 29,Son of Karachi Based Business Man,Ali Jahangir Siddiqui will take Charge as the Pakistan’s Ambassador to US.
ii. Earlier Siddiqui  had Served as a Advisor on Economics and Business to Prime Minister Abbasi,He also served as a Chairman of JS bank Ltd & JS Private Equity.He was Honoured as a Young Global Leader by the World Economic Forum in the year 2014.
iii. Siddiqui is Replacing Aizaz Chaudhry. 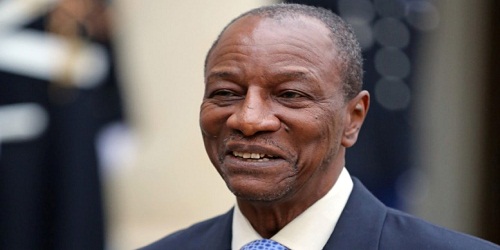 ii. Earlier,Ibrahima Kassory Fofana was Minister in Charge of Public Investment and relations with the private Sector.
iii. After assuming the Charge,he hadn’t made major Changes in the Cabinet.He  handed economy portfolio to Mamadi Camara, Guinea’s ex-ambassador to South Africa,while the defence, foreign affairs and justice ministers remain unchanged. 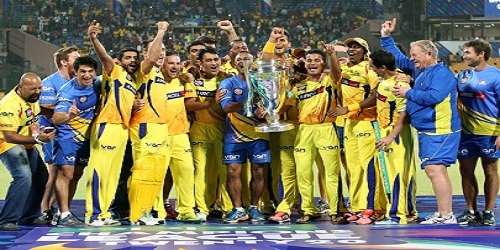 BCCI, UN Environment sign agreement to promote ‘green’ Cricket in India
On May 27,The Board of Control for Cricket in India(BCCI) and UN Environment Signed the letter of Intent to Promote “Green” Cricket in India.
KeyPoints:
i. The Letter of Intent was Signed by BCCI Acting Secretary Amitabh Choudhary and the UN Environment Executive Director Erik Solheim at the BCCI headquarters in Mumbai.
ii. The Letter of Intent was signed with the Objective to spread the awareness about the Natural Challenges the Country is facing.
iii. They aim at Phasing out Single use Plastic in the Stadiums & they are trying to reduce the environmental impact by Promoting the green Operations & will emphasis on the alternate Solutions.
About BCCI:
♦ HeadQuarter:Mumbai
♦ President:C.K Khanna.