We are here for you to provide the important current affairs June 24 2018 which have unique updates of all daily events from all newspapers such as The Hindu, The Economic Times, PIB, Times of India, India Today, Indian Express, Business Standard, all Government official websites. Our complete current affairs helps you to get more marks in Banking, insurance, UPSC, SSC, CLAT, Railway and all other competitive Exams. 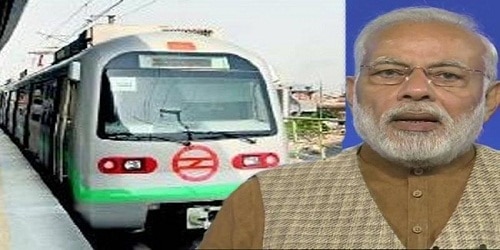 Key points:
In a video conference he stressed the importance of Metros in urban development.
About The Mundka-Bahadurgarh section .
i. The 11.2-km-long fully-elevated Mundka-Bahadurgarh corridor is part of the Delhi Metro’s Green Line.
ii. The Mundka-Bahadurgarh stretch, with seven stations, would be an extension of the existing Green Line (standard-gauge tracks) from Inderlok to Mundka.
iii. After the opening of this corridor, the entire Inderlok-Bahadurgarh section would become 26.33 km long.
iv. After this, The Delhi Metro network will now expand to 288 km with 208 stations.
v. This is the third line of connectivity to the neighbouring state of Haryana. Metro services are already operational in Gurgaon and Faridabad.
vi. The stations will be Mundka Industrial Area, Ghevra, Tikri Kalan and Tikri Border, while in Haryana, it will be Modern Industrial Estate, Bus Stand and City Park. 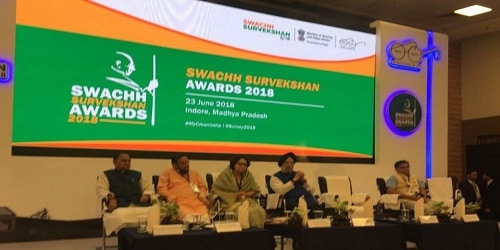 About Swachh Survekshan 2018 Report :
i. IT provides details regarding the activities and processes, the products (customized applications) and services deployed during this massive exercise which spanned over 66 days (Jan.4 to Mar.10)
ii. It is the list of all the awardees at the National Level under various population categories i.e. above 10 lakhs, between 3 to 10 lakh, and 1 to 3 lakh population ULBs and the Zonal level awards.
iii. It also has a separate section for the Cantonment Boards with a list of the awardees and the National Level Top 20 Cantonment Board Ranking.
According to it :
Vijayawada, Mysuru and New Delhi Municipal Council (NDMC) were awarded as cleanest cities in population categories of greater than 10 lakh, 3-10 lakh and 1-3 lakh, respectively while Delhi Cantt was awarded as the cleanest Cantonment Board in the country.
About Swachh Survekshan – 2018 Results Dash Board.:
i. It comprises of five sections:

ii. The dashboard features geotagging of all 4203 Cities including 61 Cantonment Boards that have participated in SS2018.
iii. It has a feature of  the Individual City Ranking and Performance page which may be opened by clicking on the map link and can also be downloaded a QR coded PDF version of city page

Centre has sanctioned Rs 1800 crore Tourism projects for various districts of Himachal Pradesh
On June 24, 2018, The Union government has sanctioned Rs 1,800 crore for tourism development projects in Himachal Pradesh.
Objective:
This would help in enhancing Himachal as major tourism destination.
Key points:
In Garagushaini
i. The Chief Minister Jai Ram Thakur announced that Garagushaini area would be developed from eco-tourism point of view.
ii. He laid foundation stone of for the Science Lab block of the Government Senior Secondary School.
iii. The government has also provided Rs 5 crore for Degree College Gadaguisaini.
iv. Helicopter services between Shimla and Chandigarh are being operated thrice a week to facilitate tourists.
In the Kullu District:
i. Central government has sanctioned development projects worth Rs 4,365 crore for the state.
ii. He also announced construction of helipad in Banjar and opening of fire sub-station, upgrade of police post to police station and the HRTC Sub Depot at Banjar.
iii. He performed ‘Bhoomi Pujan’ of the Jibhi-Tandi road to be constructed at a cost of Rs 2.45 crore.
iv. He also laid foundation stone for the new building of Block Development Officer, Banjar to be constructed at a cost of Rs 3.50 crore.
Other Developmental Projects:
i. He laid foundation stone for the Nature Learning Centre of Greater Himalayan National Park at Shairopa to be constructed at a cost of Rs 4.60 crore.
ii. Construction of 50 bedded AYUSH and Sowa Rigpa Hospital at Bajaura to be constructed at a cost of about Rs 14 crore. i. This year marked the 22nd Sindhu Darshan festival and it was started by the former Deputy Prime Minister L K Advani in 1997
ii. The Festival organised by Sindhu Darshan Yatra Samiti and Ladakh Phandey Tsogspa, Leh.
iii. It was inaugurated by RSS General Secretary Bhaiya Ji.
iv. The event focused on national integration, communal harmony and national pride.
v. It was marked by holy dip in the Indus River, hosting of national flag and cultural programme of different areas of the country.

Gujarat CM announces Suryashakti Yojana for farmers worth Rs.870 crore
On June 23,2018, The Gujarat Government announced the launch of the Rs 870-crore pilot project of Suryashakti Kisan Yojana (SKY). This is a first of its kind in the country. Objective:
This would cover, through solar power generation, 12,400 farmers in 33 districts through 137 feeders.
Key points:
i. Using this project the farmers would use solar energy for irrigation and they can sell the surplus power via grid.
ii. The farmers would have to invest only five per cent of the total amount and 60 per cent would be given as part of the Centre-state government’s subsidy. They can begin by generating 5 MW electricity.
iii. The state government will give a low interest loan on 35 per cent of the amount for seven years.
iv. Under this the state government will buy electricity from the farmers at Rs 7 per unit for first 7 years and for the remaining 18 years at Rs 3.50 per unit.
v. With the use of solar energy, the farmers would get electricity for 12 hours rather than the current 8 hours .
vi. This would contribute towards Prime Minister Narendra Modi’s goal of doubling farmers’ income by 2022.

India’s first robotic telescope opens its eyes to the universe
India’s first robotic telescope located at the Indian Astronomical Observatory (IAO) at Hanle in Ladakh has started observing the skies.
India’s first robotic telescope opens its eyes to the universe:
i. This is India’s first robotic telescope and the first one designed to observe dynamic or transient events in the universe.
ii. The telescope started observation on 12th June 2018. The facility at Hanle is called GROWTH-India. It is part of a multi-country collaborative initiative called ‘Global Relay of Observatories Watching Transients Happen’ (GROWTH) to observe transient events in the universe.
iii. The fully robotic optical research telescope has been designed to capture cosmic events happening in timescales much shorter than light years.
iv. Universities and research institutes from the US, the UK, Japan, India, Germany, Taiwan and Israel are part of this initiative.
v. Main objective of this project is time domain astronomy that involves the study of explosive transients and variable sources in the universe.
vi. The telescope is worth Rs 3.5 crore. It is a joint project of Indian Institute of Astrophysics (IIA) based in Bengaluru and the Indian Institute of Technology Bombay (IITB).
vii. The project is completely funded by the Science and Engineering Research Board (SERB) of the Department of Science and Technology (DST) under the PIRE project, administered by Indo US Science and Technology Forum.
viii. The robotic telescope measures 70 cm. It would produce more than one thousand gigabytes of data in one year.

President Kovind leaves for 3 nation visit of Greece , Suriname and Cuba
The Indian President  Mr. Ram Nath aKovind  visited Greece on June 18-19, 2018.
He is the first Indian president to travel to Greece in 11 years
i. On June 19,2018, The President gave a speech at Hellenic Foundation for Europe and Foreign Policy in Athens.
ii. The president highlighted investment opportunities in India that would work towards a USD 5 trillion economy by 2025.
iii. President Kovind addressed the India-Greek Businees forum meeting at Athens.
iv. India and Greece decided on strengthening bilateral relations on  sectors like shipping, tourism and agriculture.
v. India is committed to broad based trade and investment agreement with the European Union
On June 19,2018 the president departed for Suriname
i. President Ram Nath Kovind will perform yoga asanas to observe the International Day of Yoga.
ii. president announced extend a Line of Credit of USD 31 million and a concessional financing of USD 20 million to Suriname.
On June 22,2018 The President of India Mr.Ram Nath Kovind arrived in Cuba
i. The President of India, Shri Ram Nath Kovind, delivered a lecture at Havana University in Cuba …………………………………………………..Click here to read more

Minister of External Affairs visit to Italy, France Luxemberg and Belgium Visit to Italy
i. On June 18,2018,marks the 70th year of establishment of diplomatic ties between India and Italy.
ii. External affairs minister Sushma Swaraj  announced a bilateral Letter of Intent was signed between India and France in her presence on cooperation in the field of conservation of pre-historic ornate caves and rock shelters.
iii. External affairs minister Sushma Swaraj announced the construction of a war memorial at Villers Guislain, a town around 200 km from Paris……………………………………….Click here to read more FICCI awarded at X International IT Forum:
i. The Forum was organised by the Government of the Khanty-Mansiysk Autonomous Okrug-Ugra region.
ii.  Industry leaders from BRICS and SCO (Shanghai Cooperation Organisation) countries and other countries participated in the forum.
iii. The forum acted as a single platform to discuss collaboration in information technology and digital transformation sectors.
iv. Federation of Indian Chambers of Commerce & Industry (FICCI), industry members, senior government officials and representatives from academia also took part in the forum.
v. The Indian delegation consisted of 20 members. It was supported by Indian Embassy at Russia.
vi. Senior members of Indian Delegation made several presentations at the forum. Over 1,500 participants from 55 countries took part in the forum.
About Federation of Indian Chambers of Commerce and Industry (FICCI):
♦ President – Rashesh Shah
♦ Headquarters – New Delhi 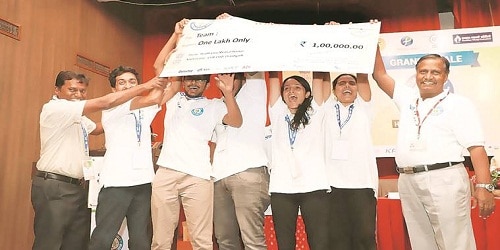 Tamil Nadu students bag top spot at Smart India Hackathon 2018:
i. Students from KCJ College of Engineering had made a device that helps school children with kinesthetic dyslexia who find it difficult to read, write or interpret words, letters and other symbols.
ii. Second prize was won by a team from Bengaluru and third spot was secured by a team from Delhi for finding a solution to the problem of lost baggage at airports.
iii. This was the second edition of the hackathon. The hackathon was a technical event conducted at the national level.
iv. It was organised by the Union Human Resources Development Ministry to encourage creativity among youth and promote the digital India initiative.
v. The grand finale of the event was conducted in 10 centres like: CSIR-CEERI, Pilani, IIT-Kharagpur, IIT-Kanpur, IIT-Roorkee and IISC Bengaluru. Union HRD Minister Prakash Javadekar participated in the award ceremony.
Some National Parks in Tamil Nadu:
♦ Mudumalai National Park
♦ Gulf of Mannar Marine National Park
♦ Guindy National Park 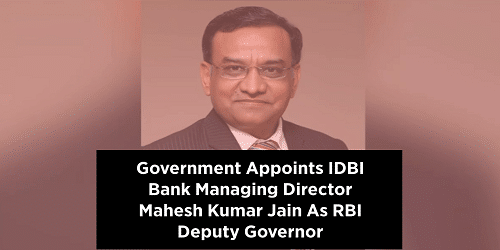 150-Million-Year-Old Turtle Fossil Discovered In China: Report
A turtle fossil that dates back to 150 million years ago, to the Jurassic period, has been discovered in Chongqing municipality, China.
150-Million-Year-Old Turtle Fossil:
i. A turtle-shell-shaped “rock” was found by a farmer in Qijiang district in early June 2018.
ii. Paleontologists from the municipal exploration bureau confirmed that it was a fossil of a snake-necked turtle from the Jurassic period. The fossil will be placed for display at the geological museum of Qijiang district. Sandeep Sejwal clinches gold at Singapore National Swimming Championships:
i. Sandeep Sandeep broke the Singapore meet record with a timing of 27:59 seconds and won gold medal. He improved his own time of 27.68 seconds in the semi-final.
ii. Also, India’s Virdhawal Khade secured a silver medal in the 50 meter freestyle event with a timing of 22.68 seconds. The Great Indian Nature Trail with Uncle Bikky:
i. The book appreciates the geographical diversity of India. It follows the travels of its protagonists Uncle Bikky, Chunmun and their dog Duggu.
ii. During their travel they learn about wildlife throughout India. The book consists of facts and quizzes at the end of each comic.
iii. The book is divided into more than 16 chapters. The book is the joint work of Rohan Chakravarty and Bijal Vachharajani.
About World Wide Fund For Nature (World Wildlife Fund (WWF)):
♦ WWF Global President -Pavan Sukhdev
♦ Headquarters – Gland, Switzerland