We are here for you to provide the important current affairs January 28 2018 which have unique updates of all daily events from all newspapers such as The Hindu, The Economic Times, PIB, Times of India, India Today, Indian Express, Business Standard, all Government official websites. Our complete current affairs helps you to get more marks in Banking, insurance, UPSC, SSC, CLAT, Railway and all other competitive Exams. 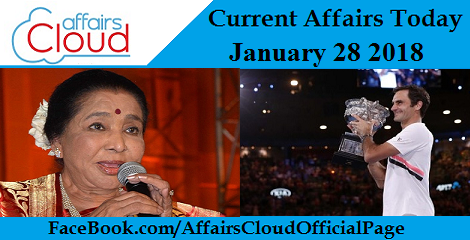 Government to set up apex cybercrime coordination centre
Union Home Ministry is planning to set up Indian Cyber Crime Coordination Centre (I4C), an apex centre to deal with cyber crimes such as financial frauds, circulation of pornographic and communal contents.
More Information about Indian Cyber Crime Coordination Centre (I4C):
i. I4C will be located in Delhi. It would actively coordinate with state governments in matters of cyber crimes and would closely monitor the cyber space and social media.
ii. The centre will also be authorised to block those websites which break India’s laws and circulate child porn and communally and racially sensitive content.
iii. State Governments have also been asked to set up cyber crime centres on similar lines at district level.
iv. It is to be noted that Government has already released Rs 83 crore under the Cyber Crime Prevention against Women and Children Scheme, for setting up of a cyber forensic training laboratory-cum-training centre for police officials in each state. 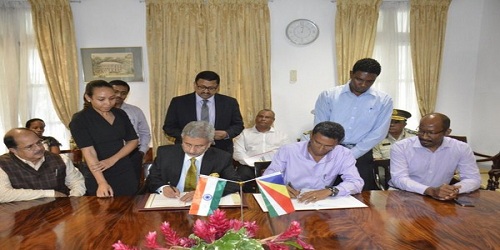 India – Seychelles agreement on military infrastructure:
i. The agreement was signed by India’s Foreign Secretary, S Jaishankar in Victoria, the capital of Seychelles.
ii. This agreement was signed in 2015 during the visit of Prime Minister Narendra Modi. However, at that time it had not been ratified by the Seychelles Government headed by previous president, James Michel.
iii. The agreement that was signed on January 27, 2018 is the re-negotiated version of the 2015 agreement.
iv. Joint efforts in anti-piracy operations and enhanced Exclusive Economic Zone (EEZ) surveillance has been covered in the re-negotiated agreement. Overall, the military infrastructure on Seychelles’s Assumption Island will expand India’s strategic reach in Indian Ocean region.
Quick Facts about Seychelles:
♦ Capital – Victoria
♦ Currency – Seychellois rupee
♦ Current President – Danny Faure

10 lakh smart meters to be installed in Haryana
In a bid to solve various complications faced by the power distribution sector, Haryana State Government has announced to install 10 lakh smart meters across the state.
i. This announcement was made by Haryana Chief Minister Manohar Lal Khattar while inaugurating the India-Japan Smart Grid Pilot Project in Panipat in the presence of Japanese Minister Keniko Sen.
ii. The smart meters will eliminate the need to visit houses for meter reading and if a meter or power supply is shut, the complaint would be resolved by the smart grid.
iii. Out of 10 lakh smart meters, five lakh meters would be installed this year and five lakh next year.
Quick Facts about Haryana:
♦ Capital – Chandigarh
♦ Current Governor – Kaptan Singh Solanki
♦ Current Chief Minister – Manohar Lal Khattar
♦ Important National Park – Sultanpur National Park 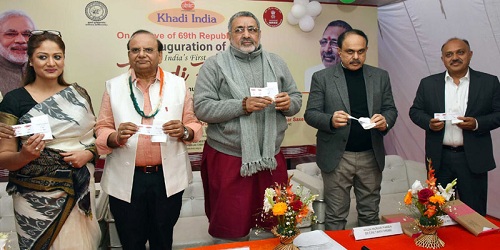 Government to set up social media communication hubs in districts
Union Information and Broadcasting Ministry has decided to set up a social media communication (SMC) hub for keeping a tab on trending news in districts and gather feedback on the Central Government’s flagship schemes.
Details about Government’s Social Media Communication Hubs:
i. Each SMC hub, comprising around 20 social media analytics executives will provide real-time reports on details relating to trending news/topics in the respective district and will serve as  “eyes and ears” of the government.
ii. Rs 17 crore (in this fiscal year) has been sanctioned for setting up 707 SMC hubs. This fund will be used for hiring personnel, development of software and other infrastructure related expenses of the SMCs.
iii. The SMC hub will not only help Government to understand the impact of various social media campaigns conducted on centre-run schemes but will also be used for disseminating content.
iv. Broadcast Engineering Consultants India Limited (BECIL), a public sector company has already floated a tender to supply a software for this project. International Bird Festival:
i. The International bird festival is aimed to promote eco-tourism in Dudhwa and to gain a distinct international identity.
ii. During the festival a Florican village consisting of 100 cottages will be formed. It will accommodate around 200 bird experts taking part in the festival.
iii. Brand ambassador of the International Bird Festival is documentary maker Mike Pandey.
iv. During the festival, bird experts will explore Dudhwa and collect details about 450 bird species living there.
v. Technical sessions, photo exhibitions, bird paintings, competitions and cultural shows will beconducted as part of the festival.
About Dudhwa Tiger Reserve:
♦ Consists of – Dudhwa National Park, Kishanpur Wildlife Sanctuary and Katarniaghat Wildlife Sanctuary
♦ Location – Lakhimpur Kheri and Bahraich districts, Uttar Pradesh
♦ Established – 1987

India cheapest country to live in after South Africa: Survey
As per a survey by GoBankingRates, a personal finance platform, India is the second cheapest country to live or retire among 112 countries.
i. The survey assessed countries on four key affordability metrics viz. local purchasing power index, rent index, Groceries index, and Consumer price index. These metrics evaluates relative affordability as compared to New York city.
ii. In terms of local purchasing power, India is 20.9 per cent lower. Rent in India is 95.2 per cent cheaper, groceries are 74.4 per cent cheaper and local goods and services are 74.9 per cent cheaper as compared to New York.
iii. South Africa topped the survey as the cheapest country to live/retire. Its high local purchasing power as compared to New York, helped it to grab the first spot.
iv. Bermuda (ranked 112), Bahamas (111), Hong Kong (110), Switzerland (109) and Ghana (108) comprise the top 5 most expensive countries.

‘Aadhaar’ is Oxford dictionary’s Hindi word of 2017
Oxford Dictionaries has declared ‘Aadhaar’ as the Hindi Word of the Year for 2017.

Hindi Word of the Year 2017:
i. This announcement was made by Oxford Dictionaries’ at the Jaipur Literature Festival on January 27, 2018.
ii. Oxford University Press has stated that ‘Hindi Word of the Year’ is the one which attracted a great deal of attention and reflects the ethos, mood, or preoccupations during 2017.
iii. Notebandi, Swachh, Vikaas, Yoga and Bahubali were the other words that competed with ‘Aadhaar’ for the title of ‘Hindi Word of the Year’.
iii. Aadhaar is the short name for the Aadhaar Card i.e. Unique Identification Numbers (UIN) introduced by the then Government of India.
iv. During 2017, Government insisted on linking Aadhaar with various services viz. Mobile phones, banking etc. This move increased Aadhaar’s significance and thereby warranted lot of attention.

CRISIL upgrades outlook on 18 PSBs from negative to stable
Rating agency CRISIL has upgraded its outlook on 18 Indian public sector banks (PSBs) from “negative” to “stable”.

Rating upgrade for 18 PSBs:
i. This upgrade by CRISIL was on account of PSB recapitalisation plan unveiled by Government on January 24, 2018.
ii. As per the recapitalisation plan, Government will infuse Rs. 88139 crore capital in 20 public sector banks (PSBs) before March 31, 2018.
iii. Accroding to CRISIL, capital infusion will improve the financial risk profile of these banks and will help them meet Basel-III regulatory capital norms.
iv. Along with capital infusion announcement, Government also unveiled ‘Enhanced Access and Service Excellence (EASE)’, a six-fold roadmap for reforms in PSBs which will improve the overall functioning of these banks.
Quick Facts about CRISIL:
♦ Founded in – 1987
♦ Headquarters – Mumbai, Maharashtra 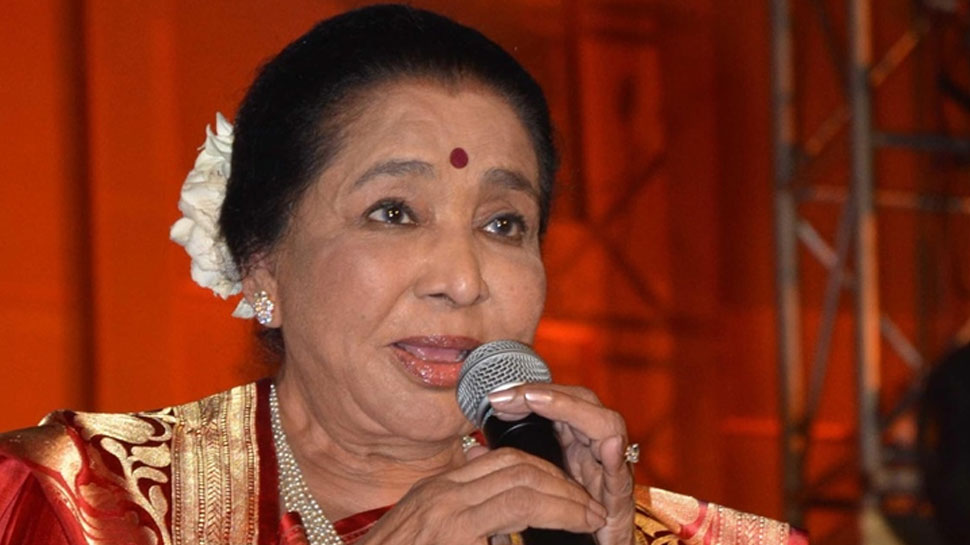 Sandeep Lamichhane – first Nepal player to get IPL contract:
i. Sandeep Lamichhane is 17 years old. He has been bought by Delhi Daredevils for his base price of Rs 20 lakhat the 2018 Indian Premier League Auction.
ii. His performance at the 2016 ICC U-19 World Cup had gained him a good reputation, where he took a hat-trick against Ireland and finished as the second highest wicket taker with 14 wickets.
About Indian Premier League (IPL):
♦ Administrator – BCCI (Board of Control for Cricket in India)
♦ Format – Twenty20
♦ Founded – 2007 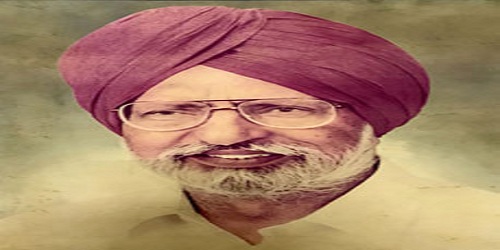 Death of Gurcharan Singh Kalkat:
i. Gurcharan Singh Kalkat was 92 years old. He had contributed a lot to Green Revolution in Punjab.
ii. He was the founder-chairman of the Punjab State Farmers Commission and former vice-chancellor of PAU (Punjab Agricultural University), Ludhiana.
iii. He has received Padma Shri and Padma Bhushan awards. He completed his BSc in Agriculture at the Punjab Agriculture College.
iv. He joined the Ohio State University and finished his PhD in agricultural zoology-entomology.
v. He served as a senior agriculturist in the World Bank. He monitored the World Bank assisted programmes in India, Sri Lanka, Nepal and Indonesia.
About Punjab Agricultural University (PAU):
♦ Vice-Chancellor – Baldev Singh Dhillon
♦ Location – Ludhiana, Punjab
♦ Established – 1962