We are here for you to provide the important current affairs February 11 2018 which have unique updates of all daily events from all newspapers such as The Hindu, The Economic Times, PIB, Times of India, India Today, Indian Express, Business Standard, all Government official websites. Our complete current affairs helps you to get more marks in Banking, insurance, UPSC, SSC, CLAT, Railway and all other competitive Exams. 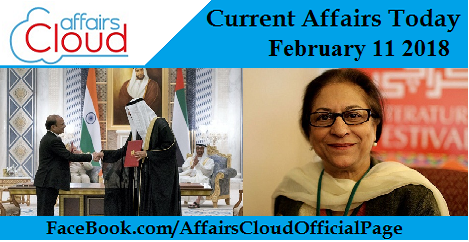 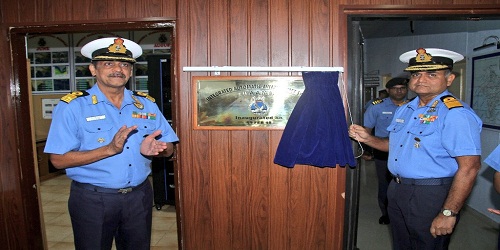 About Integrated Automatic Aviation Meteorological System (IAAMS):
i. INS Garuda has become the fourth Naval Air Station to be the part of this integrated system.
ii. IAAMS is Indian Navy’s project aimed at modernising the Meteorological infrastructure of the nine Naval Air Stations.
iii. IAAMS comprises state of the art Meteorological Sensors viz., Transmissometer, Radar Vertical Wind Profiler, Ceilometer and Automatic Weather Observation System which automatically records relevant weather parameters (that are vital for accurate weather forecasting) on continuous basis.
iv. On detecting any abnormal change of weather parameters that may affect safe flying operations, the system raises an alarm to alert the duty staff about the same. India Health Fund to boost research on TB, malaria
India Health Fund (launched by Tata Trusts in association with The Global Fund) will financially support innovations and technologies aimed at combating tuberculosis and malaria.
Details about India Health Fund initiatives to boost research on TB, malaria:
i. Indian Health Fund (IHF) will be supporting individuals and organisation that are already involved in developing new products and strategies that impact the entire lifecycle (from prevention to post-cure recovery) of TB and Malaria.
ii. IHF’s role will be to make such solutions sustainable and scalable.
iii. It has invited project proposals in four areas of research viz. use of technology and data science to strengthen surveillance of TB and malaria, promotion of robust molecular diagnostic facilities, innovations on effective communication strategies to be adopted for preventing transmission of TB and malaria and research on innovative approaches to vector surveillance.
iv. In the context of this news, it is important to note that TB and Malaria, together account for over 4.23 lakh deaths and around 15 million cases every year.

Centre grants Rs.1269 crore for Andhra Pradesh projects
In last few days, Central Government has released a sum of Rs. 1269 crore to Andhra Pradesh for various projects.
i. Out of Rs. 1269 crore, Rs. 417.44 crore has been given as grant for the Polavaram multipurpose project across the Godavari River.
ii. Andhra Pradesh State Government has claimed that it has already spent over Rs. 7200 crore on the Polavaram multipurpose project. As this project has been accorded the status of National Project, it is eligible to receive grant from Central Government.
iii. However, Central Government has so far released grant of only Rs. 4329 crore. Amount of Rs. 417.44 crore which has been recently granted is a small portion towards filling up the gap.
iv. Out of Rs. 1269 crore released in last few days, Rs. 369.16 crore is post-devolution revenue deficit grant, as per the recommendation of 14th Finance Commission.
v. Another Rs. 253.74 crore has been provided as ‘basic grant’ to urban local bodies in Andhra Pradesh, Rs. 196.92 crore for the anganwadi services scheme and the supplementary nutrition programme and Rs. 31.76 crore for the Mahatma Gandhi National Rural Employment Guarantee Programme
Quick facts about Andhra Pradesh:
♦ Capital – Amaravati (de facto)
♦ Current Chief Minister – N Chandrababu Naidu
♦ Current Governor – E S L Narasimhan
♦ Important National Park – Papikonda National Park 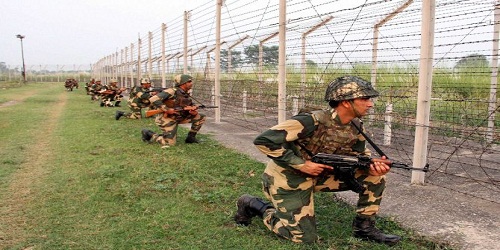 Funds to fortify Indian Army bases:
i. The funds will be used to plug security gaps at the bases and thereby building protection against any terror attacks.
ii. This project for strengthening perimeter security at army bases was cleared by Union Defence Minister, Nirmala Sitharaman.
iii. A deadline of 10 months has been set to carry out this project and Army headquarters has been directed to monitor the implementation.
iv. In recent years, there have been several terrorist attacks targeting military installations. After the attack on the Pathankot air force base in 2016, committee headed by Lt Gen Philip Campose had recommended carrying out security audit of military bases.
v. Over 3000 sensitive bases, including 600 highly sensitive installations of the Indian Army, Navy and the Air Force have been identified. In July last 2017, Central Government had delegated “substantial” financial powers to the all three defence forces to strengthen perimeter security at sensitive bases across India.

RBI to get another liquidity management tool in standing deposit scheme
In Union Budget 2018, Finance Minister Arun Jaitley had proposed to amend the Reserve Bank of India (RBI) Act to empower RBI for adopting an additional instrument for liquidity management.
Standing Deposit Facility (SDF) as an additional instrument for liquidity management:
i. The additional instrument that is being referred to is the ‘Standing Deposit Facility (SDF) Scheme’, which was first suggested by Urjit Patel Committee in January 2014 as an additional instrument to be used by RBI for absorption of surplus liquidity from the system, without the need for providing collateral in exchange.
ii. As per the current provision, RBI is required to provide a collateral while absorbing surplus liquidity from the system. This norm becomes a constraint during special situations such as post-demonetisation phase where RBI had ran out of securities owing to unprecedented flows entering the system.
iii. Under proposed SDF, wherein RBI would not be required to provide collateral, it will have greater flexibility in handling such situations.
iv. In November 2015, RBI formally proposed the introduction of the SDF by suitably amending the RBI Act. As per the announcement made in Union Budget 2018, this proposal is now a part of the Finance Bill 2018 which is scheduled to be approved by Parliament by March 31, 2018. India-UAE concessional agreement in oil sector:
i. This is the first time ever that an Indian Consortium has received concession in the Gulf.
ii. The concessional agreement between Indian oil companies and ADNOC is for 40 years from 2018 to 2057 and the participation fees are valued at $600 million.
iii. For this agreement, the Indian consortium is led by Oil and Natural Gas Corp (ONGC), while Indian Oil Corporation and Bharat Petro Resources Ltd. are the other members.
iv. A negotiated contract between a business entity/ business consortium and a government that gives the business entity/ business consortium the right to operate a specific business within the government’s jurisdiction is referred to as concessional agreement.
Quick Facts about ADNOC:
♦ Founded in – 1971
♦ Headquarters – Abu Dhabi, UAE

Scientists grow human eggs to maturity in lab for first time
Scientists have successfully accomplished growing of human eggs in a laboratory environment for the first time.
Scientists grow human eggs to maturity in lab for first time:
i. Scientists have achieved successful growth of human egg from the earliest stage in ovarian tissue till maturity for the first time in laboratory. Earlier, this process had been achieved in mice.
ii. The results of this process were published in the journal Molecular Human Reproduction. Scientists from two research hospitals in Edinburgh and the Center for Human Reproduction in New York were involved in this research.
iii. Earlier, human eggs were grown in laboratory only from later stage of development. This process will help in regenerative medicine therapies and developing new infertility treatments.
About Indian Medical Association (IMA):
♦ Headquarters – New Delhi
♦ National President – Dr. Ravi Wankhedkar 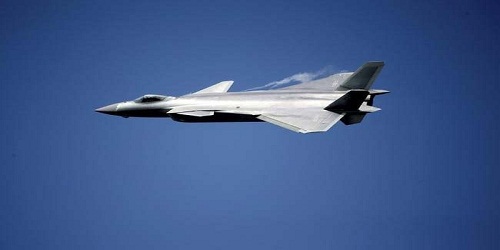 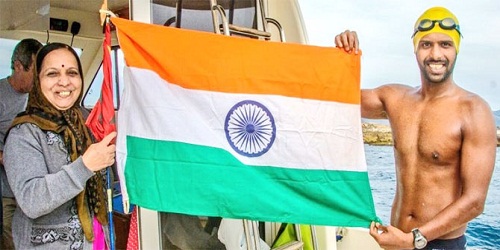 Rohan More – world’s youngest to complete Ocean 7 Challenge:
i. The Ocean Seven Challenge is to cross seven of the world’s toughest ocean channels comprising a distance of nearly 200 km.
ii. The Ocean Seven Challenge covers the North Channel, the Cook Strait, the Molokai Channel, the English Channel, the Catalina Channel, the Tsugaru Strait and the Strait of Gibraltar.
iii. Rohan More is 32 years old. He is the ninth swimmer on the whole to complete the Ocean 7 Challenge.
About Swimming Federation of India (SFI):
♦ Purpose – central governing body for promotion and administration of swimming sport in India
♦ Formed – 1948
♦ President – Digambar V. Kamat

Death of Asma Jehangir:
i. Asma Jehangir was known as Pakistan’s Iron Lady. She was the head of Human Rights Commission of Pakistan.
ii. She was also the chairperson of the Supreme Court Bar Association. She was a UN Rapporteur in the 1990s.
iii. In 1983, she was jailed for supporting the democrats during the rule of General Zia-ul Haq. She raised her voice against military dictators and law evaders.
About Asma Jehangir:
♦ Age – 66
♦ Profession – Lawyer, Human Rights Activist 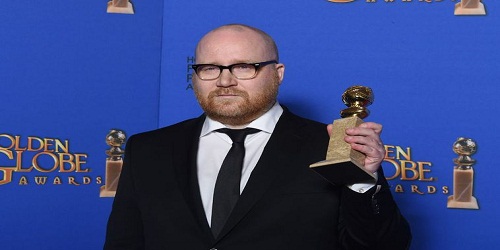 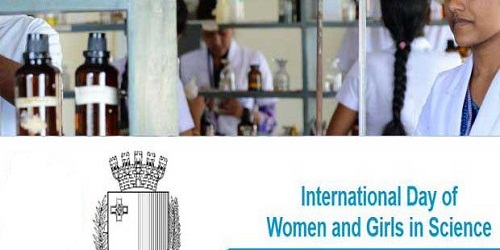