We are here for you to provide the important Current Affairs September 15 2018, which have unique updates of all daily events from all newspapers such as The Hindu, The Economic Times, PIB, Times of India, India Today, Indian Express, Business Standard, all Government official websites. Objective:
Aim to ensure the goal of achieving ‘Swachhata’ within the targeted deadline:  Mahatma Gandhi’s 150th birth anniversary on October 2, 2019.
Key Points:
Events of the Launch is as follows:
i. Prime Minister travelled to the Babasaheb Ambedkar Higher Secondary School, at Rani Jhansi Road in central Delhi.
He offered floral tributes to a statue of Babasahed Ambedkar, and participated in the cleanliness drive.
ii. The PM acknowledged the efforts of many eminent personalities who contributed to the movement. Some of them were:

iii. He urged the people to participate in swachhata activities and use the ‘#SHS2018’ tag for it.
iv. The Indo-Tibetan Border Police or ITBP adopted one village each from Ladakh to Arunachal Pradesh.
Achievements:

About Swachhta Abhiyan:
i. Launched in 2014, Swachh Bharat Abhiyan (SBA) (or Swachh Bharat Mission (SBM) or Clean India Mission in English) is a campaign in India that aims to clean up the streets, roads and infrastructure of India’s cities, smaller towns, and rural areas. The objectives of Swachh Bharat include eliminating open defecation through the construction of household-owned and community-owned toilets.
ii. Run by the Government of India, the mission aims to achieve an Open-Defecation Free (ODF) India by 2 October 2019, the 150th anniversary of the birth of Mahatma Gandhi, by constructing 90 million toilets in rural India at a projected cost of Rs.1.96 lakh crore (US$30 billion).
iii. The other name of the campaign is ‘Satyagrah se Swachhagrah’.
Slogan is ‘One step towards cleanliness’.

Power Ministry launches Chiller Star Labelling Program on energy efficiency in chillers.
On September 14, 2018, Ministry of Power launched the Chiller Star Labelling Program in New Delhi.
i. It will be valid upto 31st December 2020.
Objective:
To encourage the deployment of Energy Efficient chiller systems in the country.
Key Points:
i. It has been formulated by Bureau of Energy Efficiency (BEE).
ii. This has been launched ahead of the occasion of 24th World Ozone Day and the 31st Anniversary of Montreal Protocol, which will be observed on 16th September 2018.
iii. Agenda of the program:

iv. The Programme envisages  providing star rating in terms of its energy performance.
v. For this, BEE has developed an online registration platform for easy and expeditious approval under this initiative.
vi. Under this, the star label (1 to 5) will be awarded, with 5 star being the most efficient chillers based on the test certificate from designated agencies and after due verification from BEE.
v. This will promote advancement technology for central HVAC (Heating, ventilation, and air conditioning) systems.
vi. Hence improving the energy efficiency in space and process cooling sector.
Background:
i. Chillers are used extensively for space conditioning of buildings and for industrial process cooling applications.
ii. They contribute more than 40 per cent of the total energy consumption in commercial buildings.
Ministry Of Power:
♦ Minister of State (I/C):  Raj Kumar Singh.
♦ Power Secretary: Shri Ajay Kumar Bhalla.

Rajasthan’s forest minister inaugurates state’s first lion safari at Nahargarh Biological Park
On 13th September 2018, Rajasthan Forest Minister Gajendra Singh Khimsar inaugurated Rajasthan’s first lion safari atNahargarh Biological Park.
Key Points:
i. This service will be available for visitors from October 2018. Visitors can see lions in their natural habitat in the park.
ii.Visitors will be taken on a 4 kilometer safari in a closed bus. Three sub-adult Asiatic lions have been shifted in the area now.
iii. The lion safari has been developed on 36.32 hectares of area in the park. Jaipur Development Authority (JDA) has developed infrastructure for the lion safari spending Rs 4 crores.
iv. The park is located on the Delhi-Jaipur National Highway in the Aravalli foothills.
v. Gajendra Singh Khimsar also approved the extension of Jaisamand Wildlife Sanctuary near Udaipur.
Some National Parks in Rajasthan:
♦ Darrah National Park
♦ Desert National Park
♦ Ranthambore National Park

AP Govt launches website to tackle unemployment under Yuva Nestam scheme
On September 14, 2018, the Andhra Pradesh government announced the start of an unemployment allowance as part of Yuva Nestam scheme for the state’s youth from October 2018.
i. For this purpose, the CM launched website yuvanestham.ap.gov.in. where candidates can register.
ii. It is aimed for the unemployed youth between the age group of 25 years to 35 years.
iii. It would give candidates an allowance of Rs. 1000 along with free of cost skill development training.
iv. The candidates are eligible for allowance even if any of their family members get a pension.
v. Eligibility of the candidates:

2 day visit of External Affairs Minister to Moscow
i. On September 13-14, 2018, External Affairs Minister Smt. Sushma Swaraj, embarked on a 2 day visit to Moscow, Russia.
ii. On September 13, 2018, Ms. Swaraj had a brief stopover at Ashgabat, Turkmenistan en route to Russia.
iii. On September 14, 2018, Mrs Swaraj and Mr Borisov also chaired the 23rd India-Russia Inter-Governmental Commission on Trade, Economic, Scientific, Technological and Cultural Cooperation (IRIGC-TEC).
iv. The commission has met in the run up to the 19th India-Russia Annual Summit which is expected k be held in India early October……………………………..Click here to read more

Hunger reached ‘alarming’ ten-year high in 2017: UN report
On September 11, 2018, according to UN’s annual multi-agency flagship report on the State of Food Security and Nutrition in the World, hunger remains the same as was ten years ago in2017.

This is a part of UNDP’s Sustainable Development goal: Zero Hunger by 2030.
i. The report was published by the following:

ii. According to the report:

iii. Reasons cited for these effects: 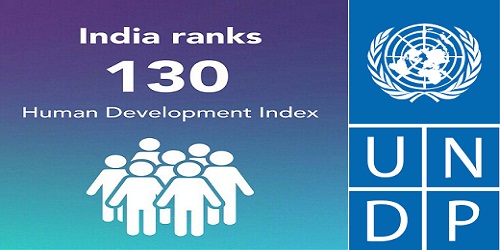 Highlights:
i. India’s HDI value for 2017 is 0.640, which put the country in the medium human development category.
ii. India’s HDI value is above the South Asian average of 0.638.
iii. Its neighbours Bangladesh and Pakistan ranked  136 and 150 respectively.
iv. Norway, Switzerland, Australia, Ireland and Germany lead the ranking.
v. Niger, the Central African Republic, South Sudan, Chad and Burundi have the lowest scores in the HDI.
vi. Out of the 189 countries for which the HDI is calculated:

Govt securities (G-secs) worth Rs 10,000 crore to be purchased by RBI on September 19
On September 15, 2018, he Reserve Bank announced purchase of government securities (G-secs) worth Rs 10,000 crore on September 19.
i. This will help induce liquidity in the system.
ii. It will buy securities having five different maturity dates i.e.: maturing in 2020, 2022, 2027, 2030, and 2042).
iii. The purchase of the government securities will be done through Open Market Operations (OMO).
iv. The submission for auction will take place through RBI’s Core Banking Solution (E-Kuber) system on the same day. 22.48 crore e-way bills generated since rollout in April: GSTN
On September 13, 2018, Goods and Services Tax Network announced that 22.48 crore e-way bills have been generated across India since its inception in April 2018.
i. July 31 accounted for the highest 21.77 lakh e-way bills generated in a single day.
ii. Of this 22.48 crore bills, the inter state transport of bills accounted for 10.89 crore bills and and intra state was 11.58 crore.
iii. Over 24 lakh taxpayers and 30,000 transporters had registered with the e-way billing system so far.
iv. At 3.13 crore, Maharashtra generated the highest number of bills, followed by Gujarat (2.45 crore), Haryana (2.05 crore), Karnataka (1.98 crore) and Uttar Pradesh (1.90 crore).

INMAS develops India’s first indigenous anti-nuclear medical kit
Institute of Nuclear Medicine and Allied Sciences (INMAS) has developed India’s first indigenous medical kit that will offer protection from serious injuries and faster healing of wounds caused by nuclear warfare or radioactive leakage.
India’s first indigenous anti-nuclear medical kit:
i. The kit has been developed by INMAS after 20 years of work. So far, similar kits were bought from US and Russia at higher prices.
ii. The kit has been developed for the armed, paramilitary and police forces only, as they are the first to get exposed to radiation.
iii. It has more than 25 items like radio-protectors that offer 80-90 % protection against radiation and nerve gas agents, bandages that absorb radiation, tablets and ointments, etc.
iv. Some of the items in the kit are:

About Institute of Nuclear Medicine and Allied Sciences (INMAS):
♦ Director – A K Singh
♦ Type – a laboratory of the Defence Research and Development Organisation (DRDO)

i. It was developed by EyeROV Technologies at Maker Village.
ii. It is the first commercial Remotely Operated Vehicle (ROV)/ underwater drone and was supported by Kerala Start up Mission (KSUM).
iii. It would be used  by NPOL for research and development activities for defence purposes.
iii. It would send real-time videos of ships and other underwater structures to help with their repair and maintenance.
Features: 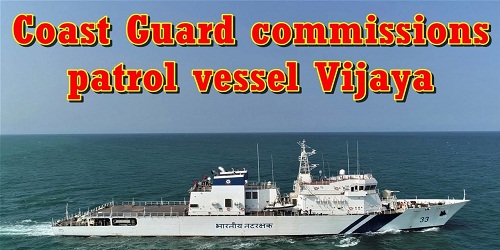 i. It has been designed and built indigenously by Larsen & Toubro.
ii. It is designed to carry one twin engine helicopter and four high speed boats, including two inflatable boats for boarding, search and rescue, law enforcement and maritime patrol operations.
iii. It also has a 30 mm gun and will be fitted with a 12.7 mm gun with fire control system.
iv. The ship will be based at Paradip and will be used for Exclusive Economic Zone surveillance (especially Odisha and West Bengal) and other duties as per Coast Guard.
v. Commandant Harinder Jit Singh will head the ship, which will be manned by 12 officers and 91 men.
Indian Coast Guard:
♦ Director: General Rajendra Singh.

England beat India in the 5th and final Test and won the series 4-1; India maintain top position in ICC Test Team Rankings
On 11th September 2018, India lost the 5th and final Test against England by 118 runs at the Oval Stadium, in England.
Key Points:
i. England team won the test series against India by a 4-1 margin. India continues to be at the number 1 position in the latest ICC (International Cricket Council) Test Team Rankings even after the 4-1 series loss against England.
ii. England has secured fourth spot in the ICC Test Team Rankings after the recent performance.
About International Cricket Council (ICC):
♦ Chairman – Shashank Manohar
♦ CEO – David Richardson
♦ Headquarters – Dubai, United Arab Emirates

Former England wicket-keeper James Foster retires from cricket
Former England wicket-keeper James Foster has announced his retirement from all forms of cricket at the end of the ongoing season.
i. James Foster is 38 years old. He has played 7 Tests, 11 one-day internationals and five Twenty20 Internationals for England between 2001 and 2009.
ii. He has scored 13,761 first-class runs at an average of 36.69 from 289 matches. He secured 839 catches and 62 stumpings in first-class cricket.
iii. At domestic level he captained Essex team. He has opted coaching as a career now. 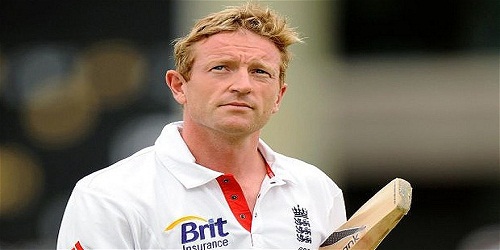 Key Points:
i. Paul Collingwood had retired from Test cricket in 2011. He will play his final game for Durham team against Middlesex team, starting from September 24, 2018.
ii. He is a 42-year-old all-rounder. He was the first England captain to win a trophy at a global tournament when they won the ICC World T20 title in 2010.
iii. He has played in 68 Tests, 197 one-day internationals and 36 Twenty20s. He has scored nearly 17,000 runs in first-class cricket.
iv. He was part of 3 Ashes-winning teams. He was one among Wisden’s 5 Cricketers of the Year in 2007. He made his first-class cricket debut in 1996.
v. He has played in the Indian Premier League (IPL) for Delhi Daredevils and Rajasthan Royals. He has also played and coached in the Australian Big Bash.

Engineers Day observed – September 15
On 15th September 2018, 51st Engineers Day was celebrated in India.
i. Engineers Day is celebrated to mark the birth anniversary of the greatest Indian engineer Bharat Ratna Mokshagundam Visvesvaraya who was born on 15 September 1861.
ii. He was the chief engineer for the construction of the Krishna Raja Sagar dam on Kaveri river in Mysuru that was the biggest reservoir in Asia at that time.
iii. He was also the chief engineer of the flood protection system for Hyderabad. 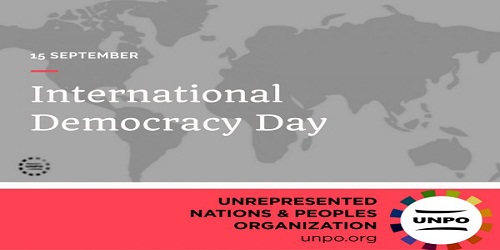