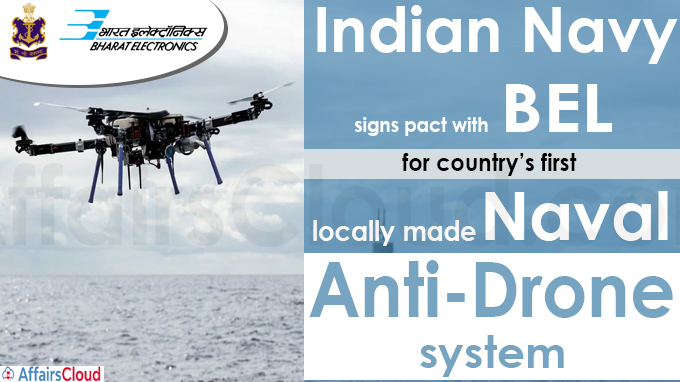 The Indian Navy has signed a contract with Bharat Electronics Limited (BEL) for the manufacture and supply of India’s 1st indigenously developed Naval Anti Drone System (NADS) with both ‘hard kill’ and ‘soft kill capabilities. Key Points:
i.The discussions were held on the  transformations that are happening in the agriculture and food systems globally.

ii.Agricultural Experts from member countries favoured the strengthening of cooperation in the in agriculture and allied sectors for food and nutritional security.
iii.It should be noted that India offers six slots of scholarships each for Master and PhD programmes in agriculture and its other initiatives for capacity development and training.
iv.The UN (United Nations) Food System Summit 2021 was also highlighted during the meeting which will be held virtually during the UN General Assembly (UNGA) in New York, United States (US) on September 23, 2021.
Other Participants:
The senior officials of DARE and ICAR Headquarters, and representatives of the Ministry of External Affairs (MEA) along with experts of Agricultural Ministries from Bangladesh, Bhutan, India, Nepal, Sri Lanka, Myanmar and Thailand participated in the meeting.
About BIMSTEC:
BIMSTEC is a link between South and South-East Asia on 14 priority areas with 5 countries from South Asia viz. Bangladesh, Bhutan, India, Nepal and Sri Lanka and 2 countries from South-East Asia viz. Myanmar and Thailand. 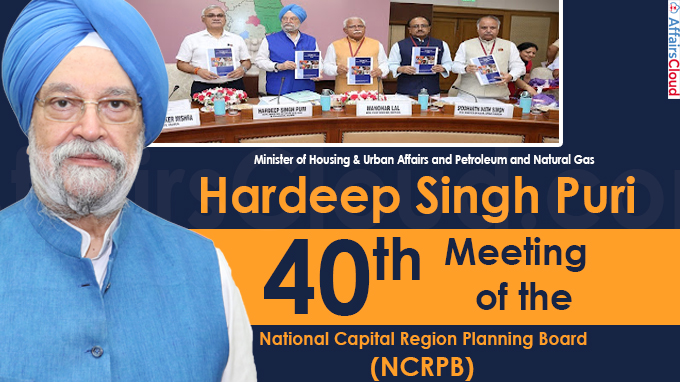 The World’s largest and tallest observation wheel named ‘Ain Dubai’ is set to be opened in Dubai, United Arab Emirates(UAE) on 21st October 2021. The ain Dubai is located at Bluewaters Island.
Hyundai Engineering & Construction and Starneth Engineering were the primary design and construction contractors of Ain Dubai.
The Ain Dubai is around 2 times taller than the London Eye, which will take the visitors to a hight of 250 meters. PayNearby has partnered with Retailers Association’s Skill Council of India (RASCI) to launch ‘PayNearbyNeoDukaan’, first-of-its-kind holistic store management tool, for the digital empowerment of its retail partners and retail stores.

BharatPe Partners with Axis Bank for its POS Business 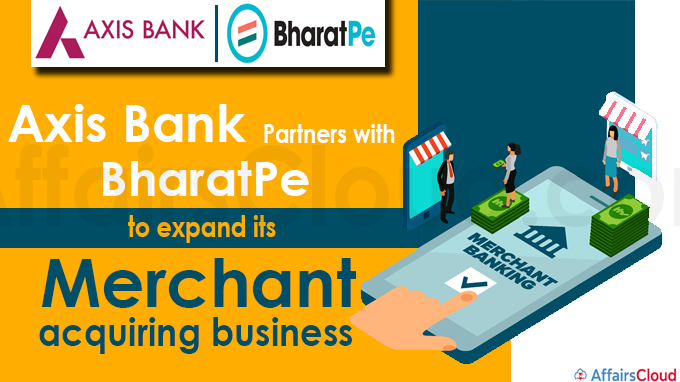 BharatPe, the fintech company for merchants, and Axis Bank, the 3rd largest private sector bank in India, entered into a strategic partnership. 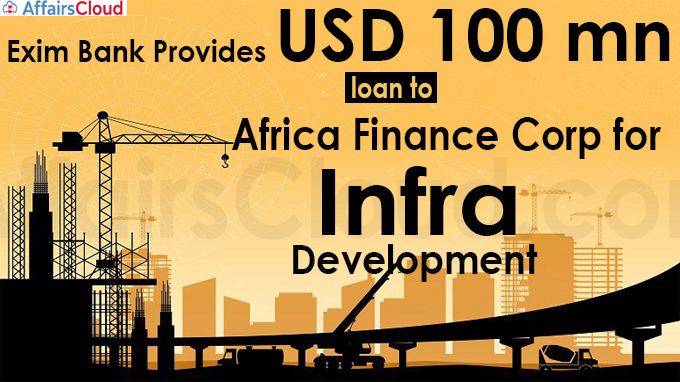 i.For the revival of COVID-19 impacts Africa’s economies, the  Export-Import Bank of India (Exim Bank) has extended a line of credit of USD 100 million (Rs 730 crore) on behalf of the Indian government to the Africa Finance Corporation (AFC).
ii.This credit line will be utilized to develop infrastructure in the continent and boost economic betterment.
iii.Its tenure will be 10 years.
About Export-Import Bank of India:
Establishment– 1982
Headquarters – Mumbai, Maharashtra
>>Read Full News 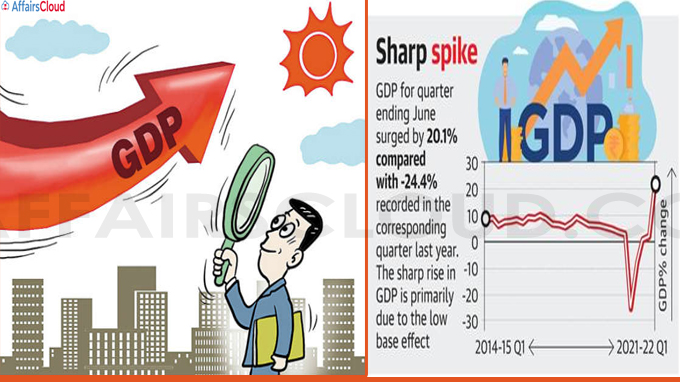 About Controller General of Accounts (CGA):
i.CGA, in the Department of Expenditure, Ministry of Finance, is the Principal Accounting Adviser to the Government of India.
ii.The Annual Appropriation Accounts (Civil) and Union Finance Accounts are submitted by CGA to Parliament under Article 150 of the Constitution.
iii.Current CGA –  Deepak Das (25th CGA, from August 1, 2021)
>>Read Full News 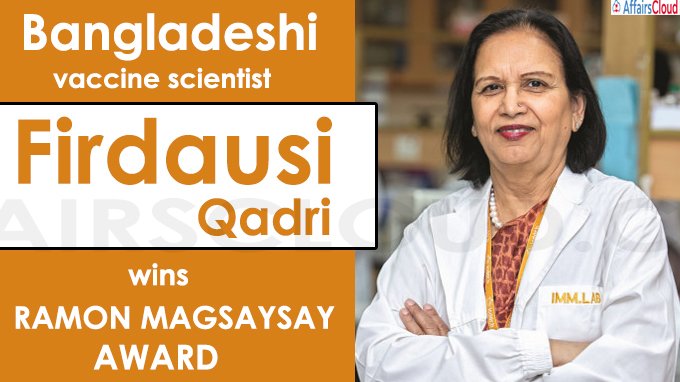 Bangladeshi scientist Firdausi Qadri, who developed a cheap oral vaccine against cholera won the Ramon Magsaysay award 2021 which is also called Asia’s Nobel Prize. Along with her, the other recipients received the award for the year 2021.

About Firdausi Qadri
i.Dr. Qadri is 70 years old senior scientist and working on projects for creating affordable vaccines to combat cholera and typhoid at the Mucosal Immunology and Vaccinology Unit at the International Centre for Diarrheal Disease Research in Dhaka,Bangladesh.
ii.She is also working to enhance efforts of mass vaccination in Rohingya refugee camps.
iii.She played a key role in providing affordable Oral Cholera Vaccine (OCV) and Typhoid Conjugate Vaccine (ViTCV) in the region.
iv.She was awarded the L’oreal-UNESCO Award 2020 for outstanding work in science to prevent infectious diseases among children.
About Muhammad Amjad Saqib
Saqib is 64 years old, Pakistani activist who has developed the first interest free Microfinance Program- Akhuwat. It uses a place of worship to provide zero-interest loans.
Ramon Magsaysay Award–
Ramon Magsaysay Award is an annual award established to perpetuate former Philippine President Ramon Magsaysay of his integrity in governance, courageous service to the people, and pragmatic idealism within a democratic society.
Established – April 1957
Location – Manila, Philippines i.Nabha Power, a wholly owned subsidiary of Larsen & Toubro (L&T) has won 2 awards at the 22nd National Award Ceremony for Excellence in Energy Management.
ii.Nabha Power was adjudged as the National Energy Leader 2021 for its performance for the 3rd consecutive year in energy management and Excellent Energy Efficiency Unit Award for outstanding achievements in Energy Efficiency.
iii.Nabha Power supplies power to Punjab at one of the lowest variable cost of Rs.2.93 per unit among Integrated Power Producers (IPPs) in Punjab.

About CII National Award for Excellence in Energy Management:
i.CII National Award for Excellence in Energy Management 2021 is the 22nd edition of the awards which recognises all types of industrial sectors in India.
ii.The award recognises and award excellence in energy management among the industrial sector and to enable the sharing of information on best practices and technologies.
iii.The criteria for different awards are,

Alar Karis Elected as the President of Estonia 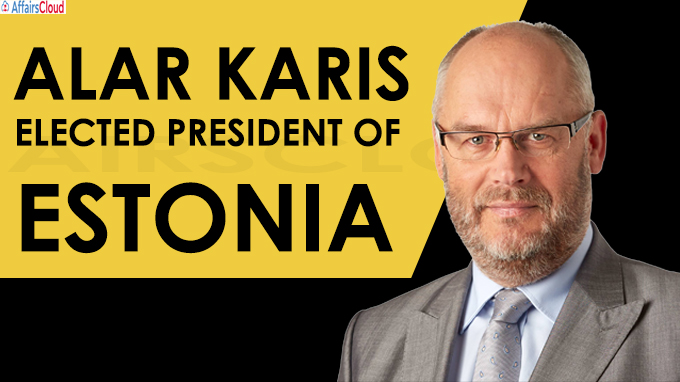 About Alar Karis:
i.Alar Karis hails from Tartu, the 2nd largest city of Estonia.
ii.He is a molecular geneticist and developmental biologist who has served as a professor and then headed the University of Tartu between 2007-2012.
iii.He has served as the Auditor General of Estonia in 2013 to 2018.
Parliament of Estonia:
i.The unicameral parliament of Estonia is known as ‘Riigikogu’.
ii.101 members of Parliament are elected at general elections for a term of 4 years.
President of Estonia:
i.The role of the President of Estonia is ceremonial while the Prime Minister has the major power.
ii.The President has the authority to veto laws, appoint government ministers and serve as the supreme commander of the Armed forces of Estonia.
About Estonia:
Prime Minister– Kaja Kallas
Capital– Tallinn
Currency– Euro South African Cricketer & Right-arm fast bowler, Dale Willem Steyn has announced his retirement from all forms of Cricket (ODIs, T20Is) at the age of 38. He had retired from Test cricket in 2019.

Awards
i.He was named one of the Wisden Cricketers of the year in 2013 & Wisden Leading Cricketer in the World for 2013.
ii.He was featured in Wisden Cricketers of the Decade in 2019.
iii.Steyn was included in the International Cricket Council (ICC) Test Team of the Decade at the end of 2020.
About International Cricket Council (ICC):
Chairman – Greg Barclay
Headquarters – Dubai, United Arab Emirates

Princepal Singh Bajwa from Punjab became the first Indian to be part of an NBA title winning team (at any level of the NBA) when his team Sacramento Kings won the 2021 NBA Summer League in Las Vegas in United States against the Boston Celtics. Eminent Bengali Author Buddhadeb Guha, a professional chartered accountant and a noted classical singer and a proficient illustrator has passed away at the age of 85 in Kolkata, West Bengal. He was born on 29th June 1936 in Kolkata, West Bengal.
His wife Ritu Guha, an eminent Rabindra Sangeet exponent passed away in 2001.
About Buddhadeb Guha:
i.Buddhadeb Guha is well known for his novel ‘Madhukari’ which is considered as one of the milestones in Bengali literature.
ii.He is well known as the creator of the fictional characters in Bengali literature – Rijuda, a hunter turned conservationist and Ribhu.
iii.He has been honoured with various awards including the Ananda Purashkar in 1976, Shiroman Purashkar and Sharat Puraskar.
iv.The award-winning Film(Bengali) ‘Dictionary’ was based on his novels ‘Baba Howa’ and ‘Swami Howa’.
v.His other notable books include Koeler Kachhe; Sobinoy Nibedon; Jangalmahal; Charibeti, etc. National Nutrition Week(NNW) has been annually observed across India in the first week of September since 1982. The day aims to create awareness about the benefits of eating a nutritious diet and the importance of nutrition in maintaining better health, which impacts national development. 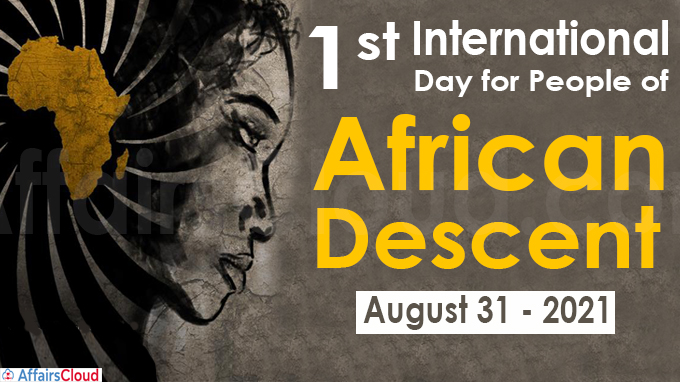 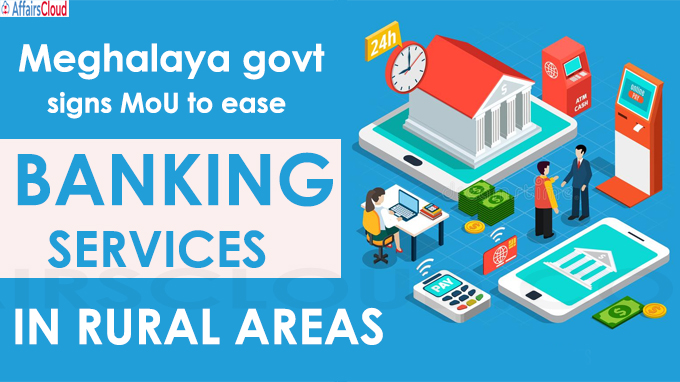 The Finance Department of  Meghalaya and Meghalaya Rural Bank(MRB) signed a Memorandum of Understanding(MoU) to provide support to 600 Business Correspondents (BCs) in the state. The government of Rajasthan nominated Gold Medalist of Tokyo Paralympics, shooter Avani Lakhera as the brand ambassador of the ‘Beti Bachao and Beti Padhao’ project under the Department of Woman and Child Development. 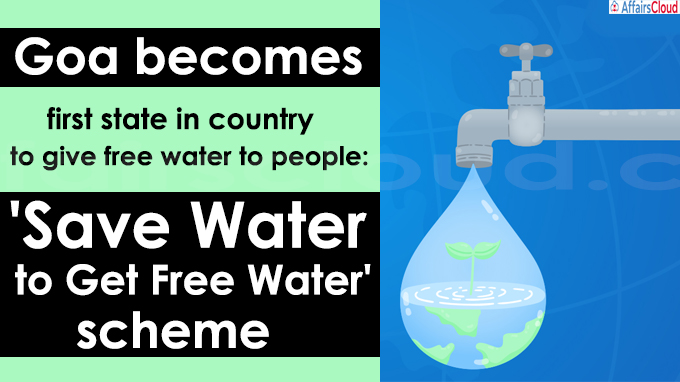 On August 31, 2021, the Chief Minister (CM) of Goa Pramod Sawant has launched ‘Save Water to Get Free Water’ scheme under which state households will not be charged for water consumption up to 16,000 litres. With this move, Goa becomes the first Indian state to supply water free of cost to its citizens w.e.f. September 1, 2021.
Key Points:
i.With this scheme, 60% of the households will get zero bills. Those living in flats or complexes will be able to utilise the scheme as water consumption of one meter will be divided among the total number of flats in the complex.
ii.Small businesses and restaurants will be billed as per commercial rates instead of industrial rates in order to take them under the benefits of the scheme.
iii.The state government also extended the one-time settlement scheme (OTS) for water bill defaulters by two months.
About Goa:
Governor– P. S. Sreedharan Pillai
Wildlife Sanctuaries– Bhagwan Mahavir Wildlife Sanctuary, Cotigao Wildlife Sanctuary, and Mhadei Wildlife Sanctuary
Zoological Park– Bondla Zoological Park The government of Union Territory (UT) of Ladakh has declared ‘Snow leopard’ (Panthera uncia) as its state animal and ‘Black-necked crane’ (Grus nigricollis) as its state bird. 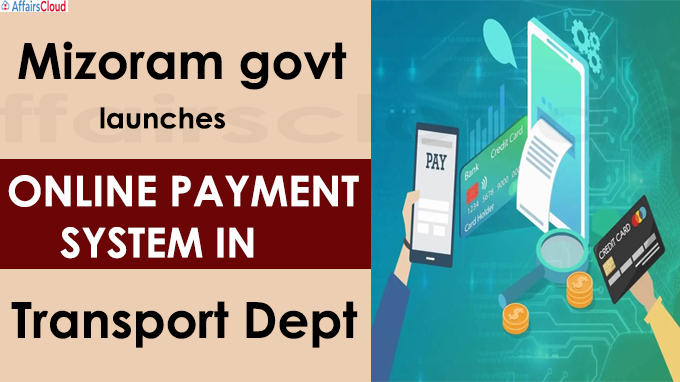 Transport Minister of Mizoram, Pu TJ Lalnuntluanga has launched an online payment system in the Transport department of the state.

Delhi tops the the Forbers India Report on the Most Surveilld Cities in the World with 1,826.6 CCTV cameras per square(sq) mile. Delhi is followed by London with 1,138 and Chennai with 609.9 CCTV Cameras per sq miles in 2nd and 3rd spot respectively.
Mumbai, Maharashtra has secured 18th spot with 157.4 cameras per sq miles.