Minister of State for External Affairs V K Singh attended a Meeting of Foreign Ministers of BRICS countries in Beijing, China on 18th and 19th June, 2017. Earlier, External Affairs Minister Sushma Swaraj, who was scheduled to attend this meeting but later cancelled it owing to health reasons. 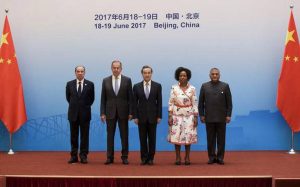 It is to be noted that BRICS Summit will be held in September 2017 in Xiamen, China, which will be attended by Indian Prime Minister Narendra Modi.