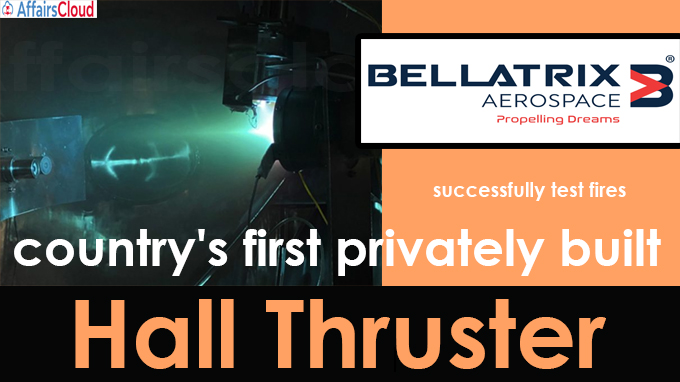 i.The thruster has been designed to power major satellite constellations which are set to be launched during 2021-30. The Thruster will also be used for a satellite mission in 2021.

ii.Bellatrix Aerospace has also developed the World’s 1st commercial Microwave Plasma Thruster, which uses water as fuel.  For this, the company has bagged an order from Indian Space Research Organisation (ISRO).

What is Hall-effect thruster (HET)?

The applications of Hall-effect thrusters include control of the orientation and position of orbiting satellites and use as a main propulsion engine for medium-size robotic space vehicles.

i.It is an IISc incubated startup established in 2015.

ii.At present it is working on proprietary propellants which can make the propulsion system more compact and cost-efficient.