According to a report published in the Lancet journal, India is ranked fourth in Global Malaria Cases in 2017. India has 4% of the cases worldwide behind the African countries Nigeria, Democratic Republic of Congo and Mozambique. 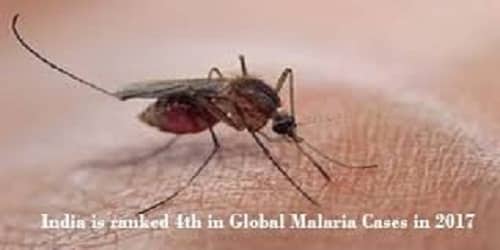 Key Points:
i. Statistics: In 2017, there were 10 million malaria cases in India out of the 219 million cases of malaria worldwide.
ii. Experts: The report was compiled by more than 40 experts including malariologists, biomedical scientists, economists, and health policy experts, assimilating existing evidence with new epidemiological and financial analyses.
iii. Estimation: New modelling techniques were used to estimate how prevalent and intense malaria could be in 2030 and 2050. Analysis indicated that socioeconomic and environmental trends will lead to low levels of malaria that persist in pockets across roughly ten countries in equatorial Africa in 2050.
iv. Elimination: India, eastern Indonesia, and Papua New Guinea will struggle to eliminate malaria by 2030 based on current trajectories.
v. Peculiar case of malaria in India: Authors noted that in 2017, 71% of the cases in Tamil Nadu occurred in Chennai with a population of 7 million people.
vi. Reason: The reason for high urban incidence in India is due to the main malaria vector being Anopheles stephensi which is particularly suited for Indian urban environments which provide breeding habitats with water storage containers, wells, gutters, and construction sites. The lack of assistance for health expenditure, forcing people to spend money out of their pockets are the other reasons. According to a 2017 report by the World Health Organization (WHO), out-of-pocket spending should not be more than 20 per cent of total health expenditure.
vii. Remedy: Strategies and interventions are needed to be framed beyond the typically deployed strategies in rural settings for eliminating malaria transmission in urban settings. Improving municipal water supply infrastructure, and reducing the need for rooftop water storage are priority interventions needed in India. The report recommends driving down out-of-pocket spending, and reallocating these funds to prepaid social health insurance schemes.