Climate Leadership Group C40, the group of major international cities that have banded together around making sustainable changes in transportation, energy use, and consumption held its 7th edition of C40 world mayors Summit 2019 at Copenhagen, Denmark from October 9- 12, 2019 with the aim to reduce greenhouse gas emissions and improve climate resilience. 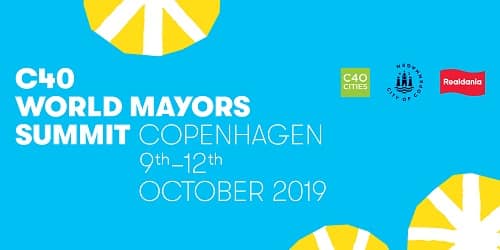 Delhi CM Arvind Kejriwal held video conference
Delhi Chief Minister (CM) Arvind Kejriwal has attended the C40 Cities Summit 2019 in Copenhagen, Denmark through video conferencing after the Ministry of External Affairs (MEA) denied approval to him for attending the summit on climate change. He announced the formation of a special task force to monitor the implementation of ‘Clean Air Cities Declaration’ signed at the meet.
Key points:
i. Delhi is one of the 38 cities of the 94 cities that participated in the Summit to have committed to combat air pollution and signed the C40 Clean Air Cities Declaration.