On March 3, 2020,The World Wildlife Day (WWD) has been celebrated based on the theme “Sustaining all life on Earth”. The day aims to celebrate the beautiful and varied forms of wild fauna and flora & raises awareness for conservation of wildlife. 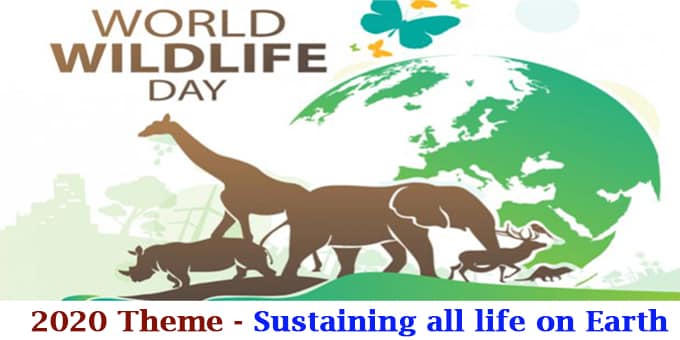 i.The main objective of  this day is to familiarize the common people with the diverse forms of wildlife and flora. At the same time people have to create awareness about the many benefits for their conservation. The day encourages people to continue their fight against poaching and other wildlife crimes. This has become necessary as many species are becoming extinct for widespread economic, environmental and social impacts.

ii.This is in line with the UN’s Sustainable Development Goals (SDG)- 1, 12, 14 and 15.The year 2020, also known as ‘biodiversity super year’, will witness several major global events aimed at conserving the biodiversity of the planet. This will enable transformative progress towards conservation and sustainable use of wild animal and plant species.

ii.The 16th meeting of the Conference of Parties (CoP16) Convention on International Trade in Endangered Species of Wild Fauna and Flora (CITES) held in Bangkok, Thailand from 3 to 14 March 2013 and passed a resolution declaring March 3 as World Wildlife Day. The results of CITES CoP16 were transmitted to UNGA.

iii.On 20 December 2013, the 68th session of the United Nations General Assembly (UNGA) decided to proclaim 3 March as World Wildlife Day. This date also marks the day of the 1973 adoption of the CITES,which  ensures that international trade is not a threat to the survival of any species.

iv.The Secretariat of CITES, in collaboration with other United Nations organizations, facilitates the implementation of World Wildlife Day.