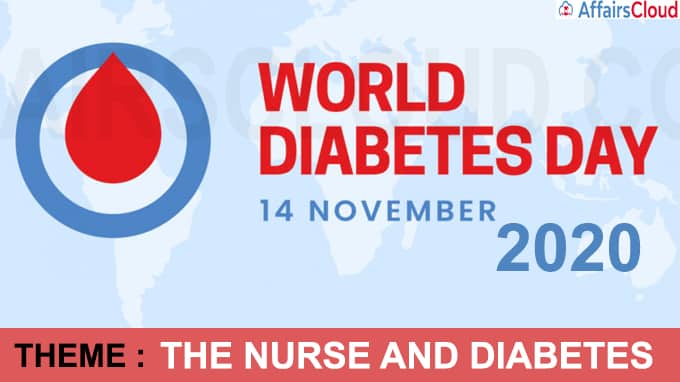 United Nations(UN)’s World Diabetes Day is annually observed across the globe on 14th November to recognise the need to undertake multilateral efforts to promote and improve the health of the humans and to provide access to treatment and healthcare education.

The theme of the World Diabetes Day 2020 is “The Nurse and Diabetes”, which focuses on the vital role of the nurses in supporting the lives of the diabetic patients.

The World Diabetes Day Campaign is represented with a blue circle logo which was adopted in 2007.

i.The International Diabetes Foundation (IDF) in association with the World Health Organisation(WHO) created World Diabetes Day and observed it on 14th November as a global event since 1991.

ii.The United Nations General Assembly(UNGA) adopted the resolution A/RES/61/225 on 20th December 2006 and proclaimed the 14th November – World Diabetes day as a United Nations day. The UN declared that the day will be observed annually, starting from 2007.

iii.November 14 was chosen to mark the birth anniversary of Sir Frederick Banting who discovered the insulin along with Charles Best in 1992.

The Nurses and Diabetes:

i.The Nurses and Diabetes campaign of World Diabetes Day 2020 aims to raise the awareness on the role of the Nurses in the lives of the Diabetes patients.

ii.The Nurses account for more than 50% of the global health workforce, they support the people with various health concerns.

iii.The support of the nurses are essential for the patients with diabetes and for the people who are at risk of developing diabetic condition.

i.Diabetes is a chronic disease, caused when the pancreas fails to produce enough insulin or when the body fails to effectively utilize the produced insulin.

ii.This condition will lead to an increased concentration of glucose level in blood(Hyperglycaemia).

The type I diabetes was previously known as insulin dependent or childhood onset diabetes.

The lack of insulin production by pancreas causes type I diabetes.

Gestational Diabetes is hyperglycaemia that is first recognized during pregnancy.

i.As a part of the World Diabetes day, WHO has announced the Global Diabetes Compact, a comprehensive and inclusive approach to support the member nations to implement programmes to prevent and manage diabetes.

ii.IDF has called for an improved funding and training to support the nurses to tackle diabetes across the globe.

iii.The Lancet has published a report calling from the action to bridge the gap in diabetes prevention and care.

i.It is estimated that around 422 million adults across the globe were living with diabetes in 2014, compared to the 108 million in 1980.

ii.The global prevalence of diabetes has doubled since 1980 and it is rising from 4.7% to 8.5% in the adult population.