On 7th September 2017, a new study claimed that one of the biodiversity-rich uninhabited island of Lakshadweep ‘Parali I’ has vanished due to coastal erosion.
About the vanishing of Parali I:
i.Parali I island of Laskshadweep has been eroded completely and vanished.The island was a part of Bangaram chain of islands, and was 0.032 square km in area in 1968.
ii.This has been discovered by a Phd researcher Mr.Hidayathulla. He was awarded PhD in July 2017 by Calicut University in Kerala for his work on “Studies on Coastal Erosion in Selected Uninhabited Islands of Lakshadweep Archipelago with Special Reference to Biodiversity Conservation.
iii.Mr.Hidayathulla did biodiversity assessment in the following five uninhabited islands of Lakshadweep namely –Bangaram, Thinnakara, Parali I, Parali II and Parali III.
iv.Erosion was seen by the researcher in all the uninhabited islands of Lakshadweep. Of which the severity of erosion was very high in Parali I that led to its vanishing.
v.From the research it has been made clear that soil erosion was the main reason for the vanishing of Parali I.
vi.The absence of Parali I was noticed in both the observations carried out in 2003 and 2007. So it is assumed that the island has been subjected to complete erosion during 1968-2003 period. 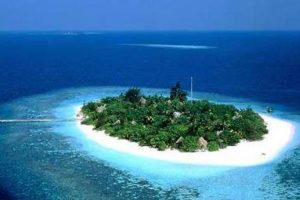 Erosion was higher in the other islands:
Parali II – 80 %
Thinnakara – 14.38 %
Parali III – 11.42 %
Bangaram – 9.968
The data obtained during the research were processed usingRemote Sensing (RS) and Geographic Information System (GIS) softwares.The vanishing of this island warns us of erosion in coastal areas due to increasing sea levels as a result of global warming.

Also these results indicate the need for urgent measures to be taken for checking of soil erosion in similar islands and protective measures to be implemented to prevent soil erosion like planting of mangrove trees.One island has submerged. Now we cannot say Lakshadweep is a group of 36 islands.