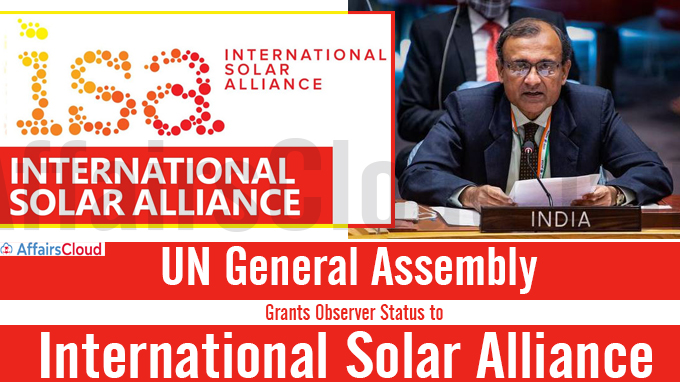 The United Nations General Assembly (UNGA) granted Observer Status to the International Solar Alliance (ISA) by adopting resolution 76/123.  This decision has been taken based on the UNGA’s Sixth Committee report.

i.The 4th UNGA of International Solar Alliance (ISA) was held in October 2021 which saw the participation of 108 countries including 74 Member Countries and 34 Observer and Prospective Countries, 23 Partner Organizations and 33 Special Invitee Organizations.

ii.In November 2021, ISA joined hands with research publishing and information analytics major Elsevier at the COP(Change Conference of the Parties )26 climate summit in Glasgow, Scotland to launch a new journal to enhance research on the use of solar power.

In November 2015, ISA was jointly launched by India and France during the 21st session of the United Nations Climate Change COP-21 in Paris, France to promote solar energy among its Member Countries. The major objective of the organization is the deployment of 1000 GW of solar capacity and mobilization of US$ 1000 billion of investment in the solar energy sector by 2030.