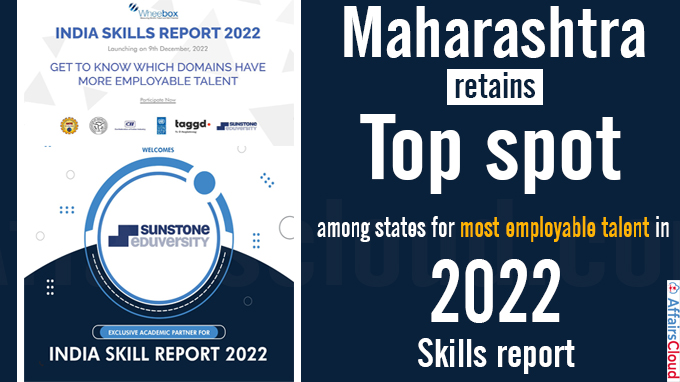 As per the 9th edition of India Skills Report (ISR)2022, released by Wheebox, Maharashtra has retained the top position in the list of states with the highest poll of employable talent followed by Uttar Pradesh and Kerala.

Men vs Women Employability and Participation at work:

Key Analysis of the Report:

i.As per the current edition, the overall employability in India has improved with 46.2% of the youth being found to be highly employable compared to last year’s employability standing at 45.97%.

ii.Gujarat topped the list of states with the highest availability of employable B.Arts & MBA Graduates in India.

iii.The highest employable age group was identified between 22-25 years of age, with 56.21 percent of the resources in this age group considered highly employable.

iv.Among the surveyed students and aspiring professionals, B.Tech graduates and MBA graduates were found to be the most employable talent from the various domains.

vi.With over 624 million internet users, it is estimated that 45% of India’s population has access to the Internet, and Indians on average spend 2.5 hours using social media platforms.

ISR is a full-fledged report about the future of work, education, and skilling to match the talent demand and supply in a growing India.