On August 22, 2019, the Time magazine published its second annual list of the “World’s Greatest Places” with total of 100 places in the list. India’s Statue of Unity in Gujarat and ‘Soho House‘ in Mumbai featured in this year’s list. The list is a compilation of 100 new and “newly noteworthy destinations to experience right now”. 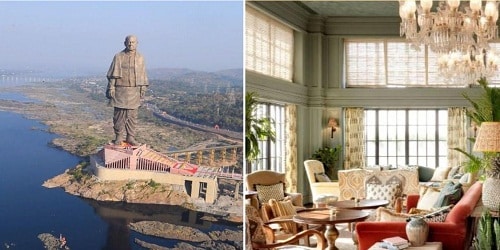 Key points:
Evaluation: The Time magazine listed the places based on categories like museums, parks, restaurants, and hotels under which quality, originality, sustainability, innovation and influence were considered for evaluation. It is categorized under “to visit”, “to stay” and “to eat and drink”.

The statue of unity:
background:
It is the statue of independence activist SardarVallabhbhaiPatel(original name:
VallabhbhaiJhaverbhai Patel) who served as the first Home minister and first deputy Prime Minister of independent India in 1947 and also the chief adherent of Mahatma Gandhi during the non-violent Indian Independence movement. He is one of the prominent leaders of the indian freedom movement and is referred to as the “Iron Man of India”.
Statue:
Located in Gujarat on a river island facing the SardarSarovar Dam on river Narmada, standing 597-ft tall (182 metres) is the “world’s tallest statue” built as a tribute to Vallabhbhai Patel. It was designed by Ram V. Sutar and  inaugurated by the Prime Minister of India Shri Narendra Modi on October 31, 2018. The cost of building this statue was of around Rs 3,000 crore. The statue is included in the “best places to visit” category.

Soho house:
Background:Soho House is a hotel chain and a group of private members’ clubs for people working in creative industries. It was first founded in 1995 in London, and as of now there are 23 house clubs around the world.
Soho house Mumbai: It is an11-­storey building in Mumbai near the Juhu Beach facing the Arabia sea. It is included in the Time’s list of the “best places to stay” in the world category.
It is the Asia’s first establishment of the hotel chain.
Other places:
The other places include Zakouma National Park in Chad, Red Sea Mountain Trail in Egypt, Newseum in Washington, The Shed in New York City, the Geosea Geothermal Sea Baths in Iceland, Six Senses Hotel in Bhutan, Leopard Hill in Mara Naboisho Conservancy, Kenya and the Pohoiki in Isaac Hale Beach Park in Hawaii.