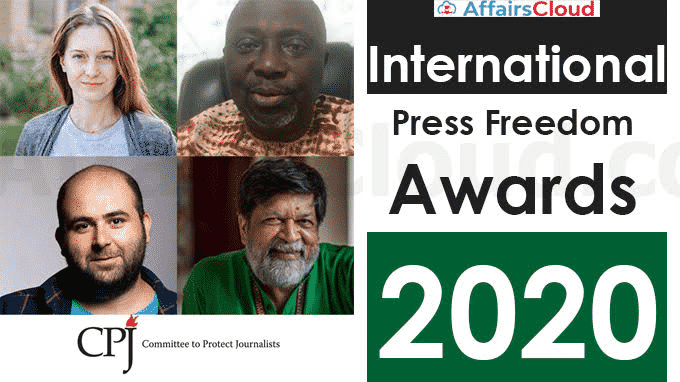 The Committee to Protect Journalists(CPJ) has announced that 4 Journalists, Shahidul Alam from Bangladesh, Mohammad Mosaed from Iran, Dapo Olorunyomi from Nigeria and Svetlana Prokopyeva from Russia will be honoured with the 2020 International Press Freedom Awards for their courageous act. In addition to them lawyer Amal Clooney will be honoured with the Gwen Ifill Press Freedom Award 2020.

He is the founder of the Pathshala Media Institute and the Drik photo library.He was detained in august 2018 after he posted a video about student protests in Dhaka in social Media. He was in jail for 102 days and was released in November 2018.

He was forced to resign from a reformist newspaper under government pressure as he publishes news on social media platforms.

He was arrested in late 2019 and released in early 2020. He was again arrested in February for criticizing the government’s handling of COVID-19.

He is the co-founder, CEO, and publisher of the Nigerian newspaper Premium Times.

She is a regional correspondent for Radio Free Europe/Radio Liberty, known as Radio Svoboda. She was convicted and ordered to pay a fine of 500,000 rubles (US$6,980) as she discussed about a suicide bombing in her radio show.

She is specialised in public international law, international criminal law, and human rights. She serves as an advocate for press freedom and has also served as international counsel for several journalists under threat.

i.It is an annual award given by CPJ’s board of directors to recognize extraordinary and sustained commitment to press freedom.

ii.Earlier this award was named as Burton Benjamin Memorial Award. In order to honor the veteran journalist and former CPJ board member, who died in 2016, the name was changed as Gwen Ifill Press Freedom Award in 2017.