India participated in the Tehran Dialogue Forum, the 23rd Persian Gulf International Conference held in Tehran, Iran from January 06- 07, 2020.  During the forum, India supported the Hormuz Peace initiative 2020. The initiative was done so as to seek stability in one of the world’s busiest and strategically located shipping lanes i.e, Strait of Hormuz amid escalating US-Iran tensions. Oman, India, China and Afghanistan were the key participants. 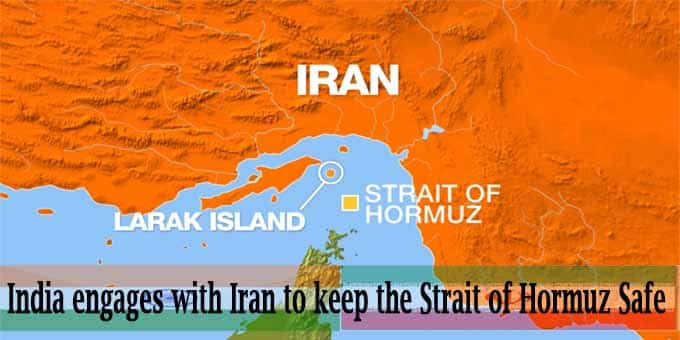 i.Plans under HOPE: The meeting reviewed the latest developments in the Persian Gulf region and also evaluated the regional cooperation plans under the ‘Hormuz Peace Endeavor’ (HOPE), proposed by Tehran at the 74th session of the United Nations General Assembly (UNGA) that was held in September 2019.

ii.Strait of Hormuz:The Strait of Hormuz is one of the world’s most strategically important choke points. It has Iran in the northern coat, UAE (United Arab Emirates) and Musandam, an enclave of Oman in the southern coast. It acts as an important gateway for significant amount of global oil supplies.

iii.Waterway issues: In june 2019, 2 oil tankers were damaged by explosions. The United States(US) blamed Iran for the attack as a response to the US tightening sanctions in Iran. however, Iran denied it. Since the explosion Indian ships under the assistance of Indian Navy(IN) passes through the waterway.

iv.Members present:Foreign Minister of Oman Yusuf bin Alawi and former President of Afghanistan Hamid Karzai and members from China and experts, directors of various foreing think tanks, and ambassadors participated in the forum.