Women and Child Development and Textiles Minister Smriti Irani notified that the Sex Ratio at Birth (SRB) increased by 13 points nationally since the implementation of the Beti Bachao, Beti Padhao (BBBP) programme from 918 in 2014-15 to 931 in 2018-19. These figures vary from the second Health Index Report released by NITI (National Institution for Transforming India) Aayog in June 2019 which showed decline in SRB in 12 out of 21 states between 2013-15 and 2014-16. 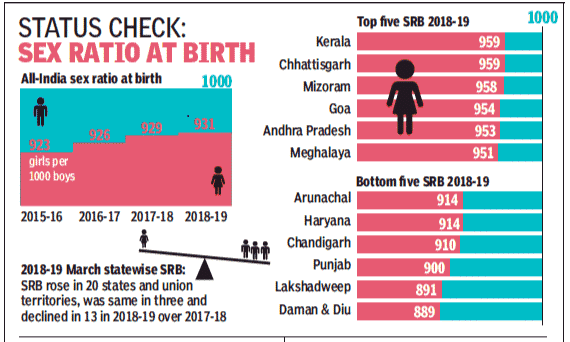 About BBBP Scheme:
The BBBP scheme was launched on 22nd January, 2015. It is being implemented in 640 districts and all districts are covered through advocacy and media campaign. Out of these districts, 405 are covered under Multi-Sectoral Intervention in which 100% Centrally Sponsored Scheme grant is provided directly to the District Magistrate/District Collector for BBBP.