Prime Minister of Singapore Lee Hsien Loong arrived in India for a five day visit(October 3 to October 7) aimed at deepening bilateral ties in a range of areas including trade and investment.

Lee Hsien Loong is a Singaporean politician and the current Prime Minister of Singapore. In 2004, Lee became the nation’s third prime minister after taking over the leadership of the People’s Action Party (PAP) when former prime minister Goh Chok Tong stepped down from the position.

His Visit to India :

The Singaporean Prime Minister was accompanied by his wife Ho Ching, a number of key Ministers and senior officials. 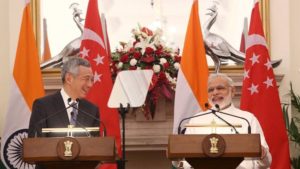 Besides that, two more MOUs will be exchanged on cooperation on

Both shared their know-how with them as goodwill and it is a base from which we can talk about other things, other areas of cooperation in tourism, projects, investments, hotels.