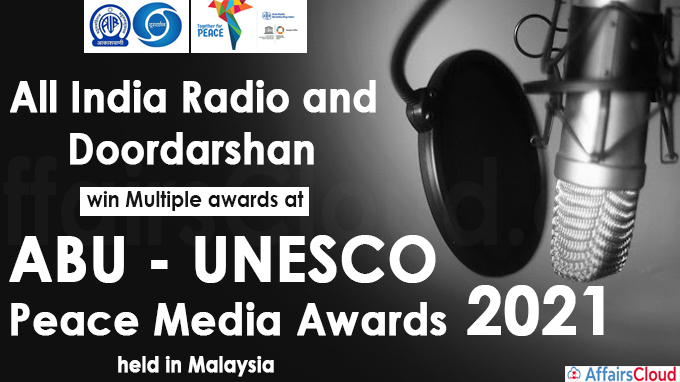 ‘Living on the edge – The coastal lives’ and DEAFinitely Leading the Way produced by All India Radio(AIR) and Doordarshan respectively have won the ABU – UNESCO Together for Peace (T4P) Media Awards 2021 held at Kuala Lumpur, Malaysia on 17th November 2021.

The awards were presented by Asia-Pacific Broadcasting Union (ABU) in collaboration with the United Nations Educational, Scientific and Cultural Organization(UNESCO) under the ‘Together for Peace’ (T4P) initiative.

i.’Living on the edge – The coastal lives’ of AIR explore the life of the fishermen community living in Visakhapatnam.

ii.DEAFinitely Leading the Way of Doordarshan is a program on the journey of a specially-abled child which aims to motivate the specially-abled persons to live their life with dignity.

i.The T4P Media Awards was launched by ABU with the support of the UNESCO Bangkok Office.

ii.The broadcasting organisations, production houses and independent producers from across the world are eligible to participate in the competition.

iii.The award honours innovative and creative Radio, TV and Digital Media content, that creates awareness about the best practices of building positive peace in three critical areas that plays a major role in achieving the Sustainable Development Goals and “building back better” from the COVID-19 pandemic.

The sub Categories for each of the Radio, TV and Digital Content categories:

The International Centre of Martial Arts for Youth Development and Engagement under the auspices of United Nations Educational, Scientific and Cultural Organization(UNESCO) (UNESCO ICM) has honoured the Kung Fu Nuns of Drukpa, from India with the inaugural UNESCO-ICM 2021 Martial Arts Education Prize to honour the nun’s acts of service to the community.

Asia-Pacific Broadcasting Union (ABU) is the biggest broadcasting union in the world.