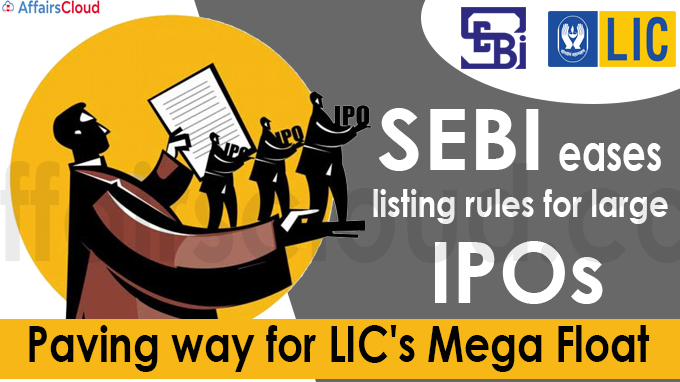 The Securities and Exchange Board of India (SEBI) during its board meeting eased the listing norms for large companies by enabling them to divest minimum 5% in the IPO (Initial public offering), instead of 10%. Also, for raising the public float to 25%, the term has increased to 5 years instead of 3 years.

ii.A company with a post-issue market cap of Rs 2 trillion will have to divest a minimum of 7.5%, instead of 10%.

iv.The Union Budget 2021-22 proposed a setting up of a gold spot exchange, the introduction of a unified securities markets code, and an investor charter.

It should be noted that this move will provide flexibility to the government for the mega float of Life Insurance Corporation (LIC) because as per earlier norms LIC would have been required to divest at least 10% at one go. Now, the minimum divest is 5%.

Decision Taken on SEBI Board Meeting

During the SEBI board meeting along with Finance Minister Nirmala Sitharaman,the following implements had been taken

What is an Initial public offering (IPO)?

The process by which a private company can go public by sale of its stocks to the general public with Minimum Public Offering(MPO).

i.The Union Cabinet has also approved the proposal of Securities & Exchange Board of India (SEBI) to sign a bilateral Memorandum of Understanding (MOU) between SEBI and Financial and Commission de Surveillance du Secteur Financier (CSSF), Luxembourg to strengthen cross border cooperation in the area of securities regulations and facilitate mutual assistance.