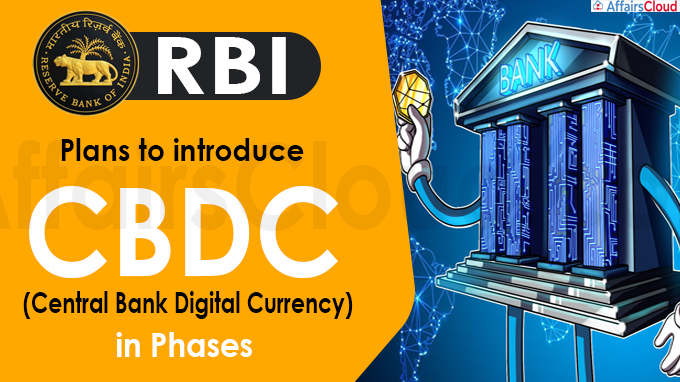 The Reserve Bank of India’s Deputy Governor T. Rabi Sankar stated about the RBI’s plan for the phased introduction of a ‘Central Bank Digital Currency’ (CBDC) at the webinar organised by the Vidhi Centre for Legal Policy.

A CBDC is a legal tender that would be issued by the central bank in a digital form. It is exchangeable one-to-one with fiat currency and it would appear as a liability (currency in circulation) on a central bank’s balance sheet.

i.To meet the public’s need for digital currencies and to protect people from the usage of private virtual currencies.

ii.To make the transition from RBI’s paper currency into a more acceptable electronic form of currency.

i.Based on the extent of its usages, CBDC would reduce the transaction demand for bank deposits.

ii.CBDC’s could act as an alternative to bank deposits, but as they are being a currency they couldn’t pay interest (like bank deposits).

iii.The introduction of CBDC would need legal changes in the nation’s foreign exchange rules and information-technology laws. To date, no central bank has launched CBDC.

iv.Shankar stated RBI’s close examination of several aspects of launching a general purpose CBDC at a population scale. This includes scope (retail or wholesale), technology (distributed ledger or centralized ledger), validation base (token or account-based system) and distribution format (issued directly by the central bank or by banks).

As per the ‘State of Economy’ report by the Reserve Bank of India (RBI) in June 2021, India ranked 2nd after Turkey in terms of the shares of ‘Surplus Transferred from Central Banks to Governments’ (as per percent of GDP). RBI has transferred 0.44 percent of GDP to the Government in FY21, in FY20 it was at the 4th position with 0.29 percent.

i.Key Appointments in RBI – Appointments Committee of the Cabinet (ACC) headed by the Prime Minister appoints the governor and deputy governors of RBI.

ii.Section 7 in The RBI Act, 1934, empowers the government to issue directions to the RBI governor.