Mission of the Scheme:

By the time India completes its 75 years of Independence in 2022, every family will have Pucca house with 24/7 electricity access, water connection and toilet facilities.

Pradhan Mantri Awas Yojana is one of the most intriguing efforts of the Government of India to stamp out social disparity. It intends to provide housing for all by the year 2022. It was launched by the Prime Minister Narendra Modi on 25th June 2015. The first loan was sanctioned on the New Year eve of 2016. The mission is to construct 2 crore houses at the final stage of the scheme.

The scheme is to be implemented throughout India except Delhi and Chandigarh.

Phases of the scheme

The span of the scheme is seven years from its launch in 2015 till 2022. The scheme is to be implemented in three phases.

Phase 1 runs for two years from April 2015 to March 2017. A total of 100 citites are being targeted in the phase. In this phase the cities with the highest priorities are selected. Urbanisation Ratio of the cities is the key governing factor in selecting the cities and prioritising them. Phase 2 will be started after the completion of Phase 1. It is to be carried on from April 2017 to March 2019. In this phase nearly 200 cities will be covered.

This phase will be executed till March 2022 and will be the final phase of the Yojana. After covering 300 cities under the scheme, this final phase will cover the rest of the cities and the left over works.

Subsidies of the Scheme

Currently the loan interest on housing is 10.5 percent. Under the scheme the government is offering housing loan at 6.5 percent. The tenure of the loan is fifteen years.

By allowing 6.5 percent interest rate, the Government of India is giving each house a subsidy of 1 Lakh that can go upto 2.3 Lakhs in North Eastern States and hilly regions. This amount is to be given by the corresponding state governments.

Women, old age people and the differently abled are to be given first preference under the scheme. 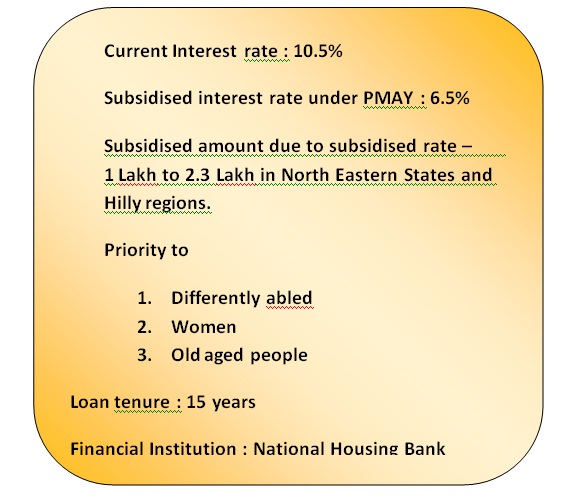 The subsidies are fixed based on the income of the beneficiaries.

The main components of the project PMAY are as follows

This particular component of PMAY focuses on bringing every slum land to formal urban settlement. This aims at using the slum land and providing the people in the slum areas with very good urban houses.

This part of the scheme alone can get extra credit limit if in need to improve the economic condition of the slum dwellers.

This component can be availed for new construction or addition of rooms, kitchen or toilets. The only condition is that the carpet area of the house should be between 30 square metres and 60 square metres. This can be claimed only by EWS and LIG

This component of PMAY is a supply side intervention. The financial assistance will be provided under this scheme with partnerships of state governments or Union Territories and also private sectors.

Citizens who cannot use the above schemes can use this scheme and get a loan of Rs 6 Lakhs. The only condition is that he / she has to belong to the EWS. This component also supports the renovation or changes in the existing house.

Benefits to Women and the Backward classes

The scheme protects the interests of the neglected group. And they would be

Apart from the above list, the members of society who find themselves out of home gain preference in the allotment of houses. They are availed with the privilege of choosing ground –floor house if in need.

It is also mandatory that while registering, the beneficiaries have to mention their wife’s name or mother’s name. 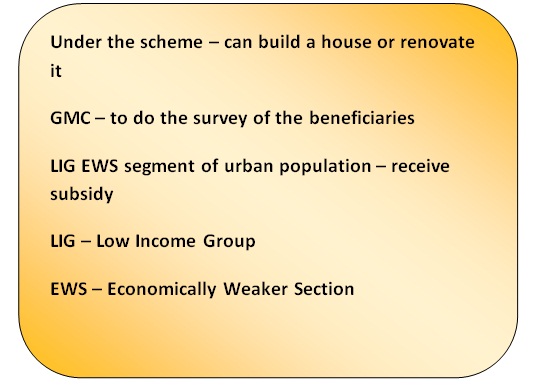 This sub – mission will also assist the state and cities in disaster defiant technologies and environment friendly technologies.

The additional financial requirements of 21, 975 crore rupees is to be fulfilled by borrowing from National Bank for Agriculture and Rural Development (NABARD)

So far, 81, 975 crore rupees has been expended for the construction of Pucca houses. 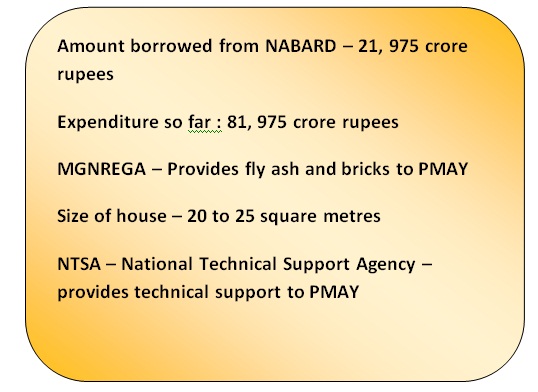 Other important facts of PMAY

The beneficiary is given the right of 90 days of unskilled labour from MGNREGA. PMAY and MGNREGA servers are linked to make sure the proceedings are in proper phases. Additional requirements such as manufacturing of bricks, fly ash will be taken up by MGNREGA.

The scheme also provides Training for masons to fulfil the shortage of masons in the ongoing process.

Initially the unit size was allocated as 20 sq m. Later it as enhanced to 25 square metre that included a dedicated area for hygienic cooking.

A National Technical Support Agency was set up exclusively for the scheme to provide technical support to centre and state to facilitate construction quality.

The Strategy of PMAY Implementation

Pradhan Mantri Awas Yojana embarks on its footsteps with the identification of the eligible beneficiaries for assistance. This is being done with the help of the information from Socio Economic Caste Census (SECC). This ensures transparency and objectivity.

The list is then presented to Gram Sabha. The Gram Sabha identifies and scrutinizes the beneficiaries who have been assisted before. It also provides valid reasons for ineligibility declared. The finalised list will then be published.

A small overview of Gram Sabha

SHARES OF CENTRAL AND STATE GOVERNMENT ON PMAY

The cost of the unit assistance is to be shared between the central and state governments. The share is 60 : 40 in plain areas and is 90 : 10 in north Eastern states and in hilly areas. As to be enlightened, the cost of construction of houses in hilly areas is more when compared to that of the plain areas.

The funds are then electronically transferred to the accounts of the beneficiaries.

A mobile application, called the “Awas app” has been launched by the Government of India for the ease of the beneficiary to track his or her payments. The application is also used to upload photographs of the ongoing works, release of next tenure funds etc.

Rajiv Awas Yojana was launched by the former President Pratiba Pail in 2009. This scheme targets at providing a slum – free India. The span of RAY was 5 years. The scheme aimed at providing water supply, street lighting, drainage and sewerages. This was to be carried out at a subsidized credit.

RAY was allocated with an amount of Rs 150 crore in the Union budget of 2009 -10. The main components of RAY were affordable housing through partnership which now included in PMAY.

Indira Awas Yojana was started by the former Prime Minister Rajiv Gandhi. IAY was restructured as PMAY as the planned tenure of the IAY came to an end in the year 2015. IAY was launched in 1985 with the target of constructing 38 lakh houses by the end of 2015. However, only 10 lakh has been completed (says an NDTV report). IAY funded the beneficiaries on a cost sharing basis between the centre and the sate as 60 : 40 except in North Eastern states and Union Territories. For north eastern states and the Union Territories share of the centre was 90 %.

Under PMAY, the grant and the sharing is all the same, but the cash will directly be transferred to the beneficiary’s account.

All the three Yojanas are to be run simultaneously hand in hand by the Prime Minister Narendra Modi. A total of 400, 000 crore rupees have been allocated for all the three projects together. The schemes mainly are connected with one another in the urban renewal and up gradation facilities, sanitation facilities and infrastructure and drainage.

AMRUT is Atal Mission for Rejuvenation and Urban Transformation.

A detailed report of AMRUT is given here.

Quiz on PMAY – Test yourself