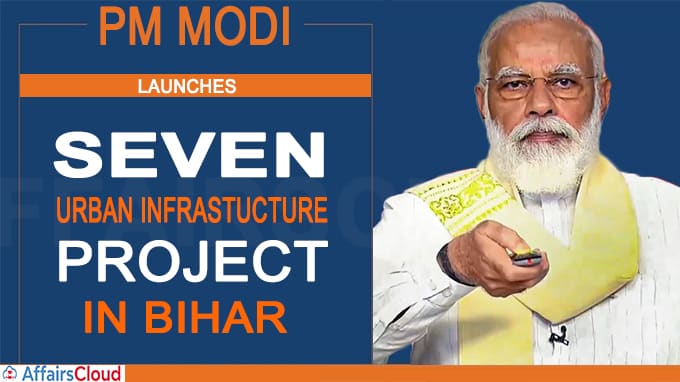 On September 15, 2020 Prime Minister Narendra Modi inaugurated & Laid Foundation Stone for Seven Projects related to Urban Infrastructure in the state of Bihar through video conference. The total cost of the projects is Rs 541 Crores.

Out of the 7 projects, 4 are related to water supply, two for Sewerage treatment and 1 for Riverfront Development.

The projects will be implemented by Bihar Urban Infrastructure Development Corporation (BUIDCO), under Urban Development and Housing Department of Bihar.

ii.The Sewerage Treatment Plant has been set up to end the flow of polluted water into River Ganga.

iii.Over 50 Projects worth Rs. 6000 Crores have been approved in Bihar to keep River Ganga Clean. The villages on the bank of Ganga are set to be developed as Ganga Gram.

iv.The Namami Gange Project is expected to change the life pattern of people and it will also be helpful for Project Dolphin and biodiversity in Ganga.

v.The Water from the Sewage treatment plants will be used for irrigation purposes in the state.

Note – The Namami Gange Project is an integrated conservation Mission set up in June, 2014 to reduce the pollution, conserve and revive the National River Ganga.  Around 20 important cities of Bihar are located on the banks of Ganga river. So the cleanliness of the river will have a direct effect on crores of people living in these cities.

i.PM laid the foundation stone of Munger water supply scheme under the AMRUT Yojana, which will enable the residents of Munger Municipal Corporation to get access to pure water through pipelines.

i.He laid the foundation stone of Muzaffarpur Riverfront Development Scheme which is being built under Namami Gange.

ii.The Three ghats of Muzaffarpur, Poorvi Akhada Ghat, Seedhi Ghat and Chandwara Ghat will be developed under the project.

iii.Basic facilities like toilets, information kiosk, changing room, watch tower etc will be available at the riverfront. Other than this, Proper security arrangements, signage and adequate lighting will also be arranged at these ghats.

iv.The riverfronts are being developed to boost tourism and make it a centre of attraction in future.

Under Jal Jeevan Mission, more than 2 crore water connections have been given all over the country & more than 1 Lakh households are being connected to piped water.

i.Garib Kalyan Rojgar Abhiyan (GKRA) is an initiative by Government of India to tackle the impact of COVID-19 on Shramik Workers (Migrant workers).

ii.This initiative played a major role in providing water connection to more than 57 lakh families during the lockdown phase, in rural areas due to the work of Sharmik Workers, who returned to Bihar from other states due to the pandemic.

i.Under the Bharatnet project 8, 743 panchayats have been connected and the digital infrastructure has been strengthened in Bihar.

ii.The number of people using the internet in Bihar has increased to 3.93 crore people against eight lakh people in 2014-15.

i.The Prime Minister paid rich tributes to Engineers, who have contributed to the development of India.