Manohar Parrikar the Union Minister for Defense presented Rakshamantri Award for excellence for year 2012-13 and 2013-14 in New Delhi. The awards were presented for three categories 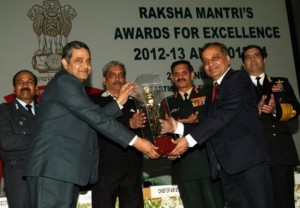 These awards are presented in gratitude of excellent performance amongst Ordnance Factories and the nine Defense Public Sector Undertakings (DPSUs).