King Willem-Alexander and Queen Maxima of the Netherlands paid a 5 day official visit to India at the invitation of Indian president Shri Ram Nath Kovind, from October 13-17 2019 to boost bilateral and political cooperation between the two nations. This was the first visit to India by the king since his ascension to the throne in 2013. Their visit in Detail are as follows, 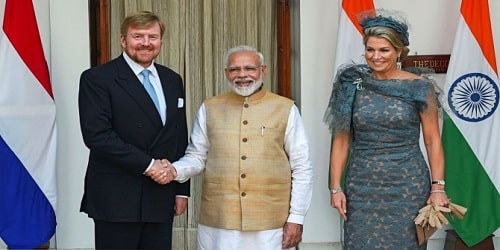 Second phase of the LOTUS-HR launched:
The 2nd phase of the Indo-Dutch project called Local Treatment of Urban Sewage Streams for Healthy Reuse, or LOTUS-HR was launched at India-Netherlands water laboratory Barapullah drain in New Delhi by Dr. Harsh Vardhan,  Ministry of Science & Technology, Ministry of Health and Family Welfare and Ministry of Earth Sciences, and the Netherlands King Willem-Alexander and Queen Maxima.

Visit to Mumbai and Kerala:
Visit to Mumbai: The Dutch King and Queen on October 16, 2019 visited Mumbai as part of their second leg of visit and  inaugurated an exhibition titled ‘Indo-Dutch Connections in the Age of Rembrandt’ at an iconic museum celebrating  400 years of shared cultural heritage of the two nations in Mumbai, Maharashtra. Art work of Dutch painter Rembrandt was showcased during the exhibition. The exhibition also commemorated the 350th death anniversary of Rembrandt.

Visit to Kerala: The Dutch King and Queen paid a two day visit to  Kerala from October 17-18,2019 where they attended seminar titled ‘India and the Netherlands – Yesterday, Today and Tomorrow’ at the Dutch palace in Mattancherry, Kerala.