King Carl XVI Gustaf Folke Hubertus and Queen Silvia Renate Sommerlath of Sweden paid a 5-day official visit to India from December 2-6,2019 at the invitation of President Ram Nath Kovind. They were received by Member of Parliament(MP) Babul Supriyo at the New Delhi airport. This is the 3rd time they both have visited India. Earlier they visited in the year 1993 and 2005.The visit in detail are as follows: 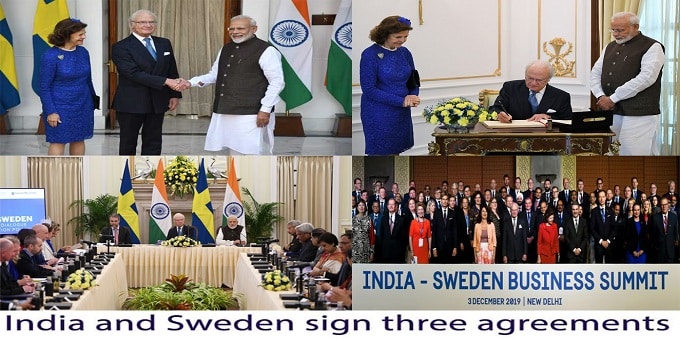 Sarai treatment plant: The Sarai treatment plant is the 1st plant completed under Hybrid Annuity (HAM) Based Public Private Partnership Model and the cost was about Rs 41.40 crores. The plant is based on aerobic biological process, Sequential Batch Reactor (SBR) process.

ii.Other projects: In addition to the above projects, several other projects have also been taken up in Uttarakhand for several Ghats, River Front Development (RFD), Afforestation, Trash Skimmers etc.

India & Sweden to set up healthcare centre:
India and Sweden announced to set up a healthcare innovation centre to promote research on non- communicable diseases and also help Indian start-ups in the health sector. The year 2019 also marks 10 years of India-Sweden cooperation in healthcare. The decision to set up health care innovation centres was taken by AIIMS (All India Institute of Medical Sciences) Delhi; AIIMS- Jodhpur(Rajasthan), and the Swedish Trade Commissioner’s Office in Delhi.

i.Union Minister of Health & Family Welfare(MoH&FW) Harsh Vardhan, Minister of State(MoS) for Health Ashwini Kumar Choubey, Union Health Secretary Preeti Sudan and Swedish State Secretary to the Minister for Health and Social Affairs Maja Fjaestad were present during the signing of the MoI.

India & Sweden to work together on AI in New Delhi:
Prime Minister Narendra Modi along with the Swedish king and queen inaugurated the India-Sweden High-Level Dialogue on innovation policy in areas such as digital health, artificial intelligence (AI), future mobility and circular economy.

Visit to Ram Jhula Bridge: The King and Queen then visited the Ram Jhula Bridge in Rishikesh and Bathing Ghat in Haridwar, Uttarakhand. On their arrival to Uttarakhand, they were received by Uttarakhand’s Protocol Minister Dhan Singh Rawat at the Jolly Grant Airport in Dehradun(Uttarakhand).

Visit to Mumbai: Swedish royal couple took part in the cleanliness drive at Mumbai’s Versova Beach, Maharashtra. The King and queen were accompanied by climate activist and lawyer Afroz Shah. He started the Versova Beach cleaning drive in 2017 and it became the world’s largest beach clean-up project.